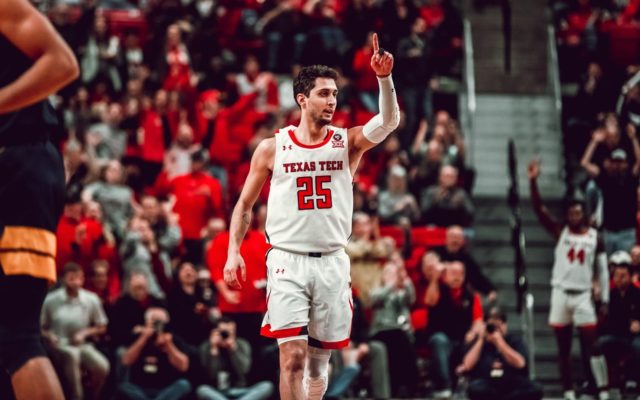 LUBBOCK, Texas – Davide Moretti scored a career-high 25 points with four 3-pointers while Terrence Shannon, Jr. added 23 points and Jahmi’us Ramsey had 21 to lead Texas Tech to an 89-81 win over No. 12 West Virginia on Wednesday at the United Supermarkets Arena.

“It was obviously a hard-fought win,” Texas Tech head coach Chris Beard said. “It was everything we expected from one of the most physical teams in all of college basketball. Above all, I thought our guys responded well. We didn’t win all the battles during the game, but we won our fair share. Obviously 3-point shooting was on our side tonight, but to out-rebound West Virginia was probably the biggest stat of the game for us because it showed how we were competing, and gang-rebounding and we had a great night shooting the ball as well. We’ve got a lot of respect for that team and I just told the guys that it was a great win. When we beat a team that’s that good, it’s a good win.”

Texas Tech led 42-38 at halftime and would lead by as many as 15 in the second half after going on an 8-0 run with back-to-back 3-pointers by Ramsey and Moretti five minutes into the half. A TJ Holyfield 3-pointer pushed the lead to 70-55 with 12:46 remaining and the Red Raiders continued holding off WVU throughout. WVU finished the game 33 of 41 at the free-throw line, but struggled everywhere else including seeing the Red Raiders own a 32-23 rebounding advantage.

Moretti, who had scored a career-high 23 points earlier this season against Creighton, finished the game 6-for-10 and now has three games this season with four 3-pointers. A junior from Italy, he’s now shooting 92.0 percent (69 of 75) from the free-throw line this season and is averaging 13.7 points per game. Ramsey matched his career-high by making five 3-pointers for the third time this season after going 5 of 8 on 3-pointers against the Mountaineers. He also made five against Baylor in Big 12 play and is now leads the team with 15.3 points per game and by shooting 41.4 percent from beyond the arc, while Shannon was one point shy of matching his career-high of 24 points against DePaul after shooting 5 of 8 from the field to go along with his season-best 12 free throws made. Shannon now leads the team with 76 free throws made and is averaging 12.1 points per game.

Holyfield gave the Red Raiders four players in double figures by scoring 11 points along with providing a season-high four blocked shots. He finished the game 4-for-7 from the field and also had five rebounds, while Chris Clarke led the team with seven assists and also had six rebounds. Shannon led the team with seven rebounds to go along with his 23 points for the Red Raiders who had 85 of their 89 points scored from the starting lineup.

Derek Culver led WVU with 16 points after going 14-for-16 at the free-throw line, while Gabe Osabuohien had 15 points and Taz Sherman scored 11. The Mountaineers were just 2 of 9 in the second half on 3-pointers and were unable to take advantage of 22 turnovers by the Red Raiders.

Texas Tech owned a 42-38 lead at halftime with Shannon at 13 points after shooting 3-for-4 from the field and going 7 of 8 from the free-throw line. The Red Raiders, who were 16 of 18 from the line at halftime, finished the opening half shooting 52.4 percent, including hitting 4 of 7 3-pointers with Moretti and Ramsey hitting two each. Moretti finished the first half with 10 points after going 2-for-2 on 3-pointers and 2-for-2 from the line, while Ramsey had eight points and Holyfield had four points and three rebounds. Clarke had three assists for the Red Raiders who had assisted on 9 of 11 baskets in the half. Tech led 12-4 early in the first half with a 7-0 run that included a pair of Shannon free throws, Ramsey hitting a 3-pointer and Shannon making a layup. The lead was back in double digits at 36-26 on Ramsey’s second 3-pointers before WVU closed out the half on a 6-1 run. Osabuohien led WVU with eight points from the bench at the break, while Culver and Haley had six points each. The Mountaineers shot 36.4 percent from the field, was limited to 2 of 9 on 3-pointers but were 12 of 15 from the free-throw line.