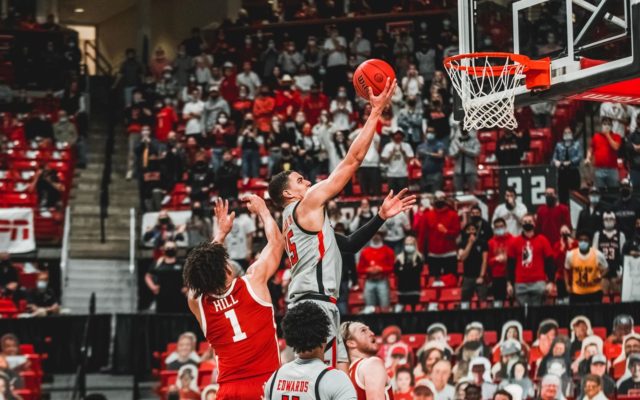 LUBBOCK, Texas – Nine non-conference home games for the Texas Tech men’s basketball are set to be played during 2021-22 season at the United Supermarkets Arena, including the highly-anticipated opener against North Florida on Tuesday, November 9.

The remaining non-conference games were announced on Tuesday by head coach Mark Adams who is entering his first season leading the program. The 2021-22 schedule starts with six games in November with five being at home beginning with North Florida along with contests against Grambling (Nov. 12), Prairie View A&M (Nov. 15), Omaha (Nov. 23) and Lamar (Nov. 27). The Red Raiders will then host Arkansas State on Dec. 14 before welcoming Eastern Washington (Dec. 22) and Alabama State (Dec. 28) to Lubbock during the Christmas Break.

Game times and broadcast designations will be announced when available.

Along with these eight home games, Texas Tech has previously posted a neutral-court game against Incarnate Word in South Padre Island, a trip to Providence for the Big 12-BIG EAST Battle, a matchup against Tennessee at the Jimmy V Classic, a neutral-court clash with Gonzaga at the Jerry Colangelo Classic in Phoenix and a home game against Mississippi State in the 2022 Big 12-SEC Challenge.

Texas Tech and North Florida will be meeting for the first time ever in the 2021-22 season opener. Tech is 68-27 all-time in season-openers after rolling to a 101-58 win over Northwestern State last season. The Red Raiders were 6-0 in non-conference home games last season, including earning an 81-40 win over Grambling. The Tigers will be making a trip to Lubbock for the second straight season are 0-3 against the Red Raiders all-time. Prairie View A&M is the third team on the schedule with a Nov. 15 game set in the eighth matchup between the two programs. Tech leads the all-time series 7-0 coming into the game with the last matchup coming in a 79-51 victory on Dec. 14, 2014.

Following the trip to South Padre Island to play Incarnate Word, Texas Tech will host Omaha and Lamar. The Red Raiders are 2-0 all-time against Omaha, including a 42-31 win in 1941 in the first matchup and most recently claiming a 91-63 win in 2012 with both games being played in Lubbock. Lamar is the only in-state non-conference team scheduled travel to Lubbock with the game set for two days after Thanksgiving. The Cardinals will come up from Beaumont for the first time since 2009 when the Red Raiders earned a 77-54 victory to improve to 3-1 all-time in the series. Lamar earned its win over TTU with an 85-79 victory in 2008 in Lubbock.

Arkansas State is the lone non-conference team coming to Lubbock with a winning record over the Red Raiders. ASU is 3-1 all-time in the series, including wins in 1993, 1991 and 1990. Tech won the first meeting with a 75-68 victory in Lubbock before taking the losses in the early 90s. The Red Raiders will travel to Arizona for their matchup against Gonzaga before returning to play Eastern Washington and Alabama State. The Red Raiders will be facing EWU and Alabama State for the first time.