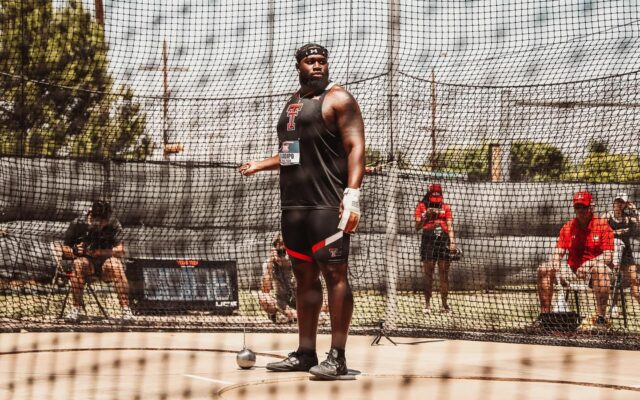 The Tech men sit in second with 18 points, while the women are in fifth with 13 points.

Oladipo gave the Red Raiders their first points of the day as he placed fifth in the hammer throw. On his third throw, he hurdled it 63.32m, taking down his previous record of 63.21m. On his very next throw, he registered a mark of 64.33m for his final mark of the day.

The multis – heptathlon and decathlon – started the day for Tech. The women’s heptathlon wrapped up first as Callie Jones (3,339 points) and Aria Tate (3,305 points) finished day one fourth and sixth, respectively. Jones placed second in the high jump, registering back-to-back PRs at 1.73m and 1.76m. Meanwhile, in the 100 hurdles, the duo started the morning with two PRs. Tate clocked in at 13.51 (2.0), while Jones crossed in at 13.75 (2.0). Their remaining events Saturday includes the long jump, javelin and 800m.

Jones made her way to the other side of campus for the women’s open javelin portion of the meet and put the women’s team on the board (eight points) with a season-best toss of 49.62m for second place – she moved to second from third on that throw which was her fifth. Maria Sotomayor added on five more points, coming in fourth with a season-best mark of 44.58m.

Markim Felix and Garrett Wade capped off day one for TTU. Felix made is long-awaited debut and registered a mark of 70.72m that would stand as second overall – his second and final throw. It puts him inside the top 20 of the NCAA. Wade made his mark on his first throw of the evening, going 66.51m.

Other finals on the day included Kayli Johnson placing 10th (53.85) in the women’s hammer, while Konner Wood registered a PR in the men’s hammer (54.98m) in 11th place.

Day two kicks off tomorrow morning at 11 a.m. starting with the decathlon 110 hurdles. All the prelims for the running events kickoff tomorrow as well.