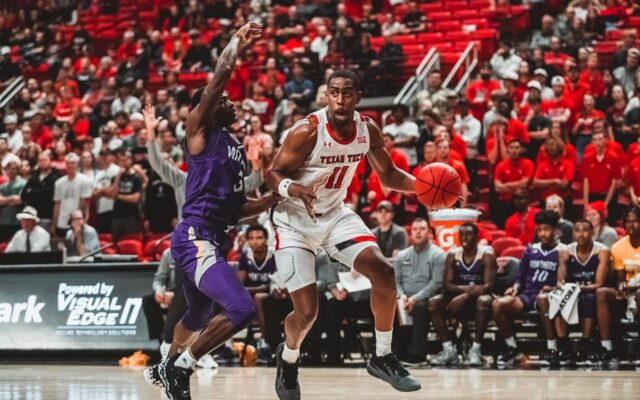 LUBBOCK, Texas – Bryson Williams went for 18 points and seven rebounds to help lead Texas Tech to an 84-49 win over Prairie View A&M on Monday where the Red Raiders closed the first half on a 15-0 run and ran way with their third straight win at the United Supermarkets Arena.

The Red Raiders (3-0) owned a 50-26 rebounding advantage, led 45-23 at halftime and rolled to their third double-digit win to close out a three-game home stand. TTU will now play against Incarnate Word at 4 p.m. on Saturday in South Padre Island before returning home to host Omaha and Lamar next week.

“We played consistent defense for most of the 40 minutes,” Texas Tech coach Mark Adams said. “I think the difference in this game was we were steady and overall pretty solid on the defensive end. We have been preaching that for that last week and a half to be more aggressive.”

Three Tech players scored in double figures in the win over PVAMU (0-5) with Davion Warren adding 15 points and Kevin McCullar scoring 12. McCullar also had seven rebounds for the Red Raiders who had 24 offensive rebounds on the night. Mylik Wilson led the team with five assists and added seven points, while Adonis Arms also scored seven points and had five assists. Wilson now has 15 assists and only one turnover through three games.

PVAMU was limited to 38.3 percent shooting in the game and committed 21 turnovers against the TTU defense.

“I just think we’re locking in in practice, listening to all the small details that coach wanted us to do,” Wilson said. “I feel like the first two games helped us really focus on our defense and I think that’s why we brought it today.”

“I think we are being more in tune to what Coach Adams wants us to do I just think were working hard and everyone is buying into his offense, taking charges,” Arms added. “This guy (Mylik) does a really good job getting in the pass lane. Davion is really good at taking charges just like Marcus so I think we’re just buying into it.”

Texas Tech finished with 10 3-pointers for the second straight game led by Warren who was 3-for-5 from beyond the arc and Kevin Obanor and Arms who hit two each. Obanor finished with eight points and five rebounds and had has now hit two or more 3-pointers in each of the first three games of the season. Chibuzo Agbo matched a career-high with six points and had a career-high five rebounds in the win. McCullar, who was coming off a career-high 24 points in the win over Grambling last Friday, added three assists and had three offensive rebounds.

Williams now leads the team with 18.7 points and 7.7 rebounds per game, while Warren is at 16.0 points per game.

Texas Tech led by 22 at halftime after closing the half with a 15-0 run with Arms hitting a 3-pointer with three seconds remaining until the break. Williams led the Red Raiders with 13 points after shooting 6-for-8 from the field in the first half, while Warren had 11 points by going 3-for-4 on 3-pointers. Obanor added six points with two 3-pointers in the opening 20 minutes and Arms had four points after hitting his last-second 3-pointer. TTU finished the first half with six 3-pointers and shooting 17-for-37 from the field. The Red Raiders owned a 24-17 advantage in rebounding and had forced 13 turnovers by PVAMU with Warren and Wilson each having two steals. Wilson led TTU with three assists in a half where the team had 12 assists on 17 baskets. The Panthers were limited to 9-for-23 shooting, 3-for-11 on 3-pointers and 2 of 8 at the free-throw line.

Tech went on an 15-0 run to take a 45-23 lead with Arms drilling a 3-pointer with three seconds remaining in the first half… Williams had made a pair of layups and McCullar hit a free throw increase the run… Williams went up to 13 points with the baskets to lead the team at the break.
McCullar hit a free throw a minute into the second half to push the run to 16-0 before PVAMU stopped it with a Daniels basket… McCullar immediately made a layup on the other end for a 48-25 lead
Tech scored on its first possession with McCullar making a steal and then finding Wilson for a layup
Warren hit Tech’s first 3-pointer of the game to make it 5-2
Tech trailed for the first time this season at 6-5 on a Christian Guess jumper at the 18:12 mark of the first half… It would be the only time they trailed in the game
Tech went on its first 9-0 run of the game to take a 17-8 lead on Warren 3-pointer with 13:33 on the clock
Tech took a 24-17 lead with a Warren dunk with 8:14 remaining in the half… Warren had eight points at the time
Took a 59-29 lead on a McCullar putback… First 30-point lead of the night that grew to 32 with a Warren fastbreak dunk
A pair of 3s by Obanor and Warren pushed the lead to 30-20 with 6:12 remaining in the first half… It was the first double-digit lead of the night