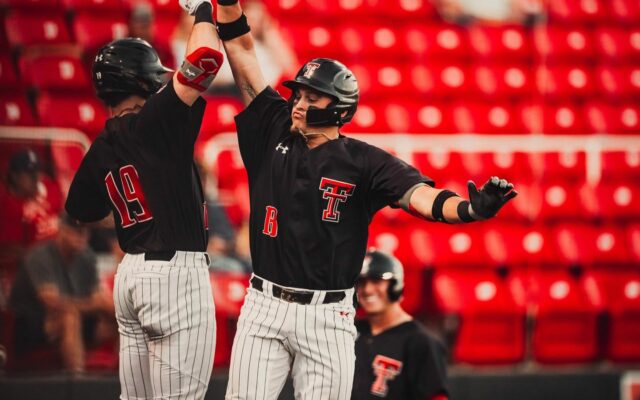 Texas Tech led by as much as nine in the game, taking an 11-2 lead into the ninth inning. The Rangers added two in the ninth, six in the 11th, and one more in the 12th to cut into the Red Raiders’ advantage.

Texas Tech recorded 12 hits to secure its win. The Red Raiders were led by four players who tallied two hits each in Parker Kelly, Cole Stilwell, and newcomers Owen Washburn and Hudson White. Stilwell went 2-of-3, and tallied the Red Raiders’ sole home run on the night, hammering a 3-run shot over the left-field fence in the 10th, and added a single in the first. On top of his two hits, he drew three walks.

Alike Stilwell, Jace Jung drew three walks, and got on base a fourth time with an RBI double that he roped to the centerfield wall in the third, scoring Dillon Carter who found the base pads via base on balls earlier in the inning.

Brandon Birdsell got the start, and struck out three while on the mound for his one inning of work that was followed by a bevy of Red Raider pitchers throughout the night.

Texas Tech is back in action on Friday at 3 p.m., as they kick off game one of the Red and Black Series. Game two is Sunday at 1 p.m., and it closes on Tuesday at 3 p.m. Admission is free of charge to all three games.