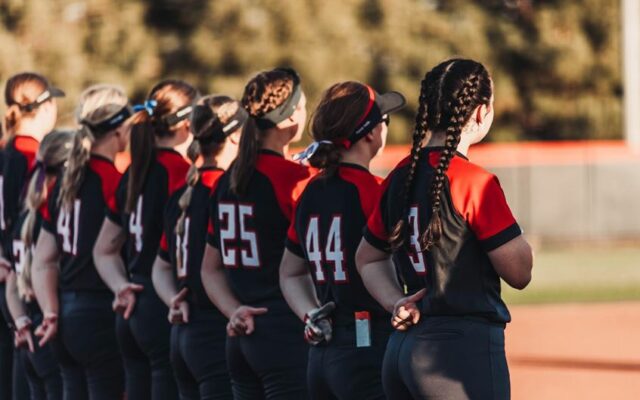 The Red Raiders outhit the Mean Green 8-7 but left seven runners on base and committed two errors resulting in two unearned runs.

North Texas opened the game by loading bases after a couple of singles and a walk off starting pitcher Kendall Fritz. The Mean Green brought in one run with a bloop single over the head of Arriana Villa but Tech limited the damage to just one run.

Tech tied the game at one off an RBI double from Carson Armijo that scored Payton Jackson from first. Jackson reached base on a single up the middle for the first Red Raider hit of the game.

The Mean Green added two more in the second with a double to right center. A walk opened the inning and an error put runners on the corners for UNT. The runner on first stole second to move into scoring position and Lexi Cobb doubled to bring in both runs, forcing Tech to make a pitching change as Olivia Rains entered in relief of Fritz. Rains was able to work out of the inning with no more harm done as Tech trailed 3-1.

A two-out rally brought Tech back within a run in the second inning. Riley Love started the rally with a single down the right field line and moved to second on a bunt single from Peyton Blythe. Villa brought Love in with a bloop to left field to make it 3-2.

After a scoreless third inning the Red Raiders tied the game at three in the bottom of the fourth. Molly Grumbo singled to lead off and Abbie Orrick dropped a hit over the second baseman to put two on with no outs. Love moved both runners over with a sac bunt and Blythe brought in Grumbo on a sac fly to right.

The score remained tied at three headed into the seventh inning. North Texas led off the top of the inning with a bunt single from Sydney Ingle who moved to second on a sac bunt. A wild pitched moved Ingle 60 feet away and a walk put runners on the corners with one out. North Texas pulled off a delayed double-steal as Ingle third came home after Grumbo threw down to Villa cutting off the ball at second. An errant throw to the plate allowed the runner on second to move to third and a ground out to second on the next at bat scored her to put the Mean Green up 5-3.

A single from Villa and a walk from Jackson gave Tech a pair of runners to start the bottom half of the inning. Armijo grounded out to the pitcher for the first out but effectively moved both runners into scoring position for Ellie Bailey who grounded out to second, scoring Villa and moving Jackson to third to make it a one run game with two outs. With the tying run on third base, Maddie Westmoreland came in to pinch hit and sent a 1-0 ball to the outfield, forcing the center fielder to backpedal but she grabbed the ball for the final out of the game.

Rains (0-4) pitched 2.2 hitless innings before finally allowing a single in the top of the fifth, which she wiped off the board the next at bat catching a line drive and doubling up the runner. She allowed just three hits and one earned run, walking two and striking out two.

Fritz, who started the game, went just 1.1 innings, giving up three runs, two of which were earned on four hits with one strikeout and one walk.

Olivia Rains 5.2 innings pitched was the longest outing of her career. Her previous high came at Oklahoma when she went 5.0 innings against Missouri State on March 7, 2020.
Arriana Villa recorded her fourth multi-hit game of the season, the most amongst all Red Raiders. She also stretched her reached base streak to six games.
Payton Jackson holds the longest reached base streak on the team, reaching base in her last nine games played dating back to Feb. 17 against Auburn with hits in each of her last four games. Jackson and Peyton Blythe are the only Red Raiders to record hits in each of the last four games.