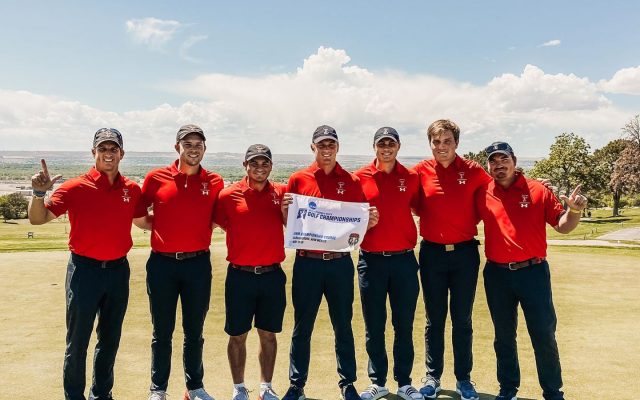 ALBUQUERQUE, New Mexico – Texas Tech is advancing to the 2021 NCAA Men’s Golf Championship after winning the NCAA Albuquerque Regional where the Red Raiders ran away with the title by shooting 26-under-par at the UNM Championship Course.

All five Red Raiders shot under-par at the 54-hole event, led by sophomores Ludvig Aberg who finished fourth at the regional after shooting 9-under with a final-round 4-under, 68 and Garrett Martin at 6-under. Martin earned 10th following shooting 4-under in his final round, while freshman Baard Skogen secured 15th overall at 4-under for the tournament. Tech seniors Kyle Hogan and Andy Lopez finished at 2-under which put them tied for 21st. Tech finished the week with a 283-278-277 – 838 scorecard which is the second-best regional 54-hole total for the program behind only a 834 score at the 2015 Lubbock Regional on its home course.

The Regional Championship is the second in program history after also winning the 2010 South Central Regional in College Station. Tech will be playing in its 13th NCAA Championship, most recently in 2018 where it advanced to the quarterfinals. The 2021 NCAA Championship will be played from May 28-June 2 at Grayhawk Golf Club in Scottsdale, Arizona.

“I’m really happy for the guys,” Texas Tech coach Greg Sands said. “They really prepared well leading up to the week and executed our game plan for the golf course. It was a complete performance because all five players were in every round. I couldn’t be happier for them. They really work hard to be better in every phase of the game and it’s nice to see the hard work pay off.”

Along with Texas Tech, the Albuquerque Regional will send Arizona State, Oregon State, Oklahoma and San Diego State to the NCAA Championship. ASU and OSU tied for second at 16-under, while the Sooners took fourth at 13-under and San Diego was fifth at 12-under. South Carolina’s Ryan Hull won the individual championship at 11-under (68-68-69 – 205) to edge out Texas A&M’s Sam Bennett and OU’s Jonathan Brightwell who shot 10-under.

Aberg was near flawless on Wednesday, finishing his final round with five birdies and only one bogey for his 68. Playing in his first regional tournament, Aberg turned in a 70-69-68 – 207 scorecard to complete his three days in New Mexico. He tied for the tournament lead with 17 birdies and secured his sixth top-5 finish of the season after also taking fourth at the Big 12 Championship. Aberg is at No. 5 in the World Amateur Golf Ranking in his second collegiate season that includes wins at The Prestige and Thunderbird Collegiate.

Martin surged into the top-10 by shooting 4-under on Wednesday, capping the regional with back-to-back birdies on No. 17 and 18 and shooting 4-under on the back-9. A sophomore from San Antonio, Martin made six birdies in his final round and turned in a three-day card of 72-70-68 – 210. It was Martin’s fifth top-10 finish. Skogen chipped in for an eagle on No. 18 to complete a 1-under final round and shoot 4-under for the tournament. A freshman from Norway, Skogen remained consistent throughout the week carding a 71-70-71 – 212 in his first NCAA postseason event. He led Tech with two eagles after also making an eagle on No. 1 on Tuesday. Skogen was 9-under on par 5s for the week, finishing with a 4.25 scoring average on them.

Sands, who is in his 20th season, has led the Red Raiders to nine NCAA Championships in his career and 25 tournament victories. The NCAA Albuquerque Regional Championship is the first tournament win for Tech in a season with eight top-5 showings through 11 stroke play events.

In the clubhouse at -26 and a double-digit lead. 😤

The respectful thing to do is hold our celebration until all teams are in. 😬 pic.twitter.com/7FQol8JY53