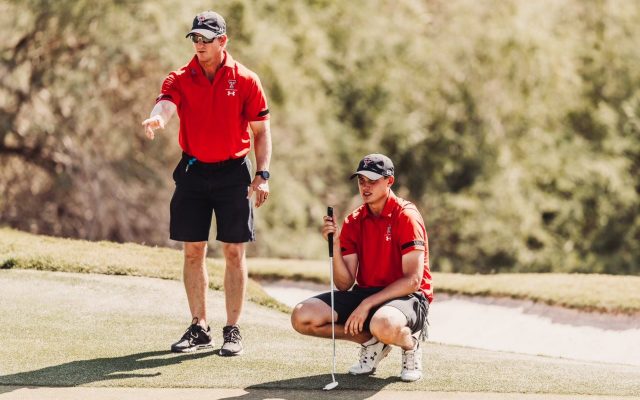 SCOTTSDALE, Arizona – Texas Tech finished 11th at the NCAA Men’s Golf Championship after the completion of Monday’s final round of stroke play at Grayhawk Golf Club’s Raptor Course to have its season come to a conclusion. Ludvig Aberg led the Red Raiders by shooting 4-under in the final round and 1-under for the championship to finish with an eighth-place showing.

Tech shot 5-over in its final round and tied Arkansas for 11th overall after finishing the tournament at 33-over to finish outside the eight-team cutline to advance to match play on Tuesday and Wednesday. Making its 13th trip to the NCAA Championship after winning the NCAA Albuquerque Regional, TTU recorded a final score card of 276-304-288-285 – 1153.

“The guys put a lot of hard work into this season,” Texas Tech coach Greg Sands said. “That’s what I’ll remember most about this team. They always fought until the end of every tournament we played in. There were some bright spots this week, but some things came back and got us with some sloppiness here and there. Ultimately, Day 2 is a day we’d like to have back. They fought until the end and I’m really proud of the effort today.”

Garrett Martin shot 3-over in the final round to finish the 72-hole tournament at 6-over, while Lopez was at 4-over on Monday which had him at 13-over (69-76-74-74 – 293) overall. Baard Skogen finished the final round at 2-under and freshman JP Roller shot 14-over. Roller, who was an alternate the first three rounds, played the final round for senior Kyle Hogan.

Arizona State won the stroke play portion of the NCAA Championship at 3-under followed by Oklahoma State which finished second at even-par after shooting 12-over on Monday. Along with ASU and OSU, the tournament will shift to match play on Tuesday with Pepperdine, Oklahoma, Illinois, Florida State, Vanderbilt and North Carolina advancing. Individually, Clemson’s Turk Pettit won the NCAA Championship by shooting 7-under following by OSU’s Bo Jin at 6-under.

Aberg turned in his best round of the tournament in the final round by shooting a 4-under, 66 that included making birdies on three of five holes to begin his back-9. Aberg was at 1-under making the turn after starting his day with his first birdie on his second hole and then getting back a stroke with another on No. 17. A par on his 10th hole was followed by a birdie on the par 4, 395-yard No. 2 hole and then back-to-back birdies on 4 and 5.

“It was fun with it being my first national championship and I had a lot of expectations of how it was going to be,” Aberg said. “It really live up to those expectations. It was a tough golf course and unfortunately our second round wasn’t where we wanted to be and got us off the map. It was a great experience and something we can learn from.”

Aberg would make par on his final four holes to secure medalist honors and turn in a final scorecard of 68-76-69-66 – 279. A sophomore from Sweden, he finished the tournament with 51 pars and 12 birdies to get to 1-under. Aberg finished his second season with the Red Raiders with nine top-10 finishes, including wins at The Prestige and Thunderbird Collegiate in the regular season and fourth-place showings at the Big 12 Championship and Albuquerque Regional.

“I thought I played great today,” said Aberg who is No. in the World Amateur Golf Rankings. “We had a great game plan that we followed all along. I just executed the shots I didn’t the other days. All of a sudden you have some birdie putts there and a few of them dropped in. It was a lot of fun to finish the way I did.”

A sophomore from San Antonio, Martin was at 3-over through nine before stringing together back-to-back birdies on No. 2 and 3 on the front side. He would make three pars after that before giving two shots back with bogeys on 7 and 9 to finish the day. Martin and Aberg both finished the tournament with 12 birdies. Lopez, a senior from Plano, also had two birdies in the final round with one on No. 9 and then on his 17th hole of the day. The birdie on the par 3, 188-yard No. 8 hole followed a long par-save putt on his 16th hole. Lopez finished the tournament with 48 pars and had six birdies.

Skogen, who is a freshman from Norway who made 11 birdies on the Raptor Course, responded from a couple tough rounds over the weekend by shooting 2-over on Monday. He was at 2-over after nine with a birdie on his eighth hole of the day and then put together back-to-back birdies on No. 6 and 7.