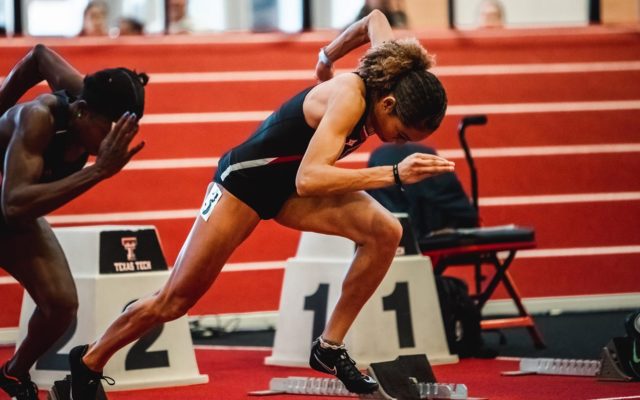 The women’s relay will head to Eugene, doing so on a program top-10 time of 44.01. This foursome, which began with Virginia Kerley and went to Kiah Dubarry-Gay, D’Jenne Egharevba and finally Peyton Ricks on the anchor. It tied for the fourth-fastest relay in school history and is the fastest 4×1 run since 2012.

Later, the women would also get their 4×400 through to nationals. Jadsia Warden led off before handing to Sara Limp. Limp passed to Amanda Crawford, who split 52.23 before giving way to anchor Lexye Price, who brought it home to finish in 3:31.79. It is the second time that foursome has gone 3:31, the other being the 3:31.74 they ran at the Big 12 Championships. Tonight’s time ranks seventh in school history, right behind their Big 12 time from two weeks ago.

The 10th-fastest men’s 4×100 in school history led the Tech squad to a nationals berth. The relay was led off by Courtney Lindsey, who handed to Jacolby Shelton and then Ashton O’Conner with Terrence Jones Jr. on the anchor. Despite an awkward handoff between legs three and four, the Red Raiders timed a season-best 39.07 with a foursome who had yet to even run together this year.

Shelton was not done – and Lindsey was far from it. Lindsey was first to run again, setting up the blocks just under two hours later for the 100m. He timed a career-best 10.15 to grab the last auto bid from a blistering first heat that claimed all three of the at-large bids as well.

Shelton was moving in his second heat, placing second with a 10.21. It was also a career best for him. Shelton had not dipped sub-10.30 in his career entering this sophomore season and has now done it each of his last five times running the event.

Later, Lindsey would complete his busy day in even stronger fashion than how he started it. Running the 200m, he timed a season best of 20.24 to grab the automatic bid to nationals. Lindsey, a former NJCAA indoor 200m national champion, will now head to Eugene competing for NCAA DI titles in the 100m and 200m while running on the 4×100 relay.

In that same heat, Jones Jr. ran a massive career best of 20.36. The Bahamian freshman entered the meet – his first NCAA meet – having never ran below 21.17 without wind. He earned his quarterfinal bid with a wind-aided 20.58, and now a wind-legal 20.36 will carry him to the outdoor title meet.

Indoor triple jump champion Ruth Usoro secured her bid to compete for the outdoor title. Usoro landed a leap of 44’-8.75”(13.63m) on her very first attempt. She would try, unsuccessfully, to improve upon it on the second, but it was a moot point as the mark – incredibly, her shortest of the year – was plenty to send her through to Eugene. In fact, the 13.63m jump ranked second of everyone in the competition.

Seasons Usual, the nation’s fifth-ranked discus thrower entering the weekend, qualified for her second career NCAA Outdoor Championships. Usual landed a top throw of 190’-7” (58.10m) on her first attempt, and it would be plenty to carry her through. The mark ranked her fifth in the standings when all was said and done.

Karayme Bartley ran 20.78 in the 200m, but it would not be enough to advance. Later, he would run on a 4×400 relay that timed 3:09.04. Bartley was the third leg, taking the handoff from Sven Cepus and handing to Josiah Macinnis. Chancellor Stephenson was the leadoff.

Maliek Kendall ran in his first career NCAA quarterfinal and emerged with a wind-legal PR. While his 13.80 was not enough to advance him to nationals on time, it would mark a great end of a strong outdoor season for the junior.

Demisha Roswell ran in the women’s hurdles, timing 13.33. Roswell had a massive – albeit wind-aided – personal best two nights before with a 12.85. Roswell is yet another Red Raider who would not advance past regionals but capped a strong debut season on a great note.

Sara Limp ran 52.65 in an elite 400m field. It wrapped her season with the second time she has qualified for the NCAA quarterfinals in the 400m.

Lexye Price was just outside of qualifying in an incredibly tough field as well. Price, running the 400m hurdles, timed a weekend-best 58.37 – her third-best time of the year. She would finish just one spot outside of advancing to Eugene.

The 200m featured Kiah Dubarry-Gay, the freshman whose big 23.17w PR from Thursday got her a lane in the quarterfinal. In that quarterfinal, she would run 23.48 and finish 18th to put an end to her individual season, though she is expected to contribute to the 4×100 at nationals.

Marco Vilca ran the 800m, timing 1:50.54 in a fast second heat. The Peruvian freshman’s first collegiate season would come to a close, but not before he ran a 1:49.59 PR in Tech’s final home meet.

The NCAA Outdoor Championships will run June 9-12 in Eugene, Ore., at the newly-renovated Hayward Field.