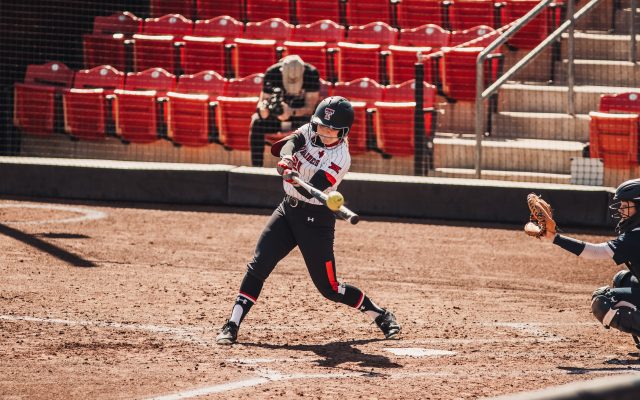 Tech’s pitchers combined for 29 strikeouts in two games with career-highs from both Missy Zoch and Erin Edmoundson in the circle.

The Red Raiders came back from a four-run deficit to defeat the Jayhawks by four runs in extra innings to open the series Saturday afternoon.

Kansas got the scoring going in the bottom of the second after a bases-loaded double to right field from Brittany Jackson brought in three runs for a 3-0 lead.

The Jayhawks added another run the next inning after an errant throw on a single to right field from Cheyenne Hornbuckle allowed Ashlyn Anderson to touch home.

Kelcy Leach cut the Jayhawks’ lead to three with a solo shot off the scoreboard in left center in the top of the fifth.

The Red Raiders brought the game within one in the sixth, after a two-run home run from Karli Hamilton. Heaven Burton reached base on an infield single and stole second to get into scoring position for Hamilton, who belted her 30th career home run over the wall in right center to make it 4-3, Jayhawks.

Kansas threated to regain the lead in the bottom half of the inning after loading the bases with no outs, but a diving grab from Riley Love at short and back-to-back strikeouts from Zoch ended the inning with no harm done. Zoch’s final strikeout of sixth was her career-high 12th of the game.

Love led off the seventh with a single to left and advanced to second on an obstruction call. Jacee Hamlin followed with an infield single that put runners on the corners with no outs for Yvonne Whaley who ripped a base hit through the left side to score Love and tie the game at four. Tech loaded the bases again off Burton’s second infield single of the day but were unable to score any more runs in the inning.

The Jayhawks had the winning run in scoring position with one out in the home half of the seventh, but a strike out and ground out ended the threat and sent the game into extras.

The Red Raider bats came up big in the eighth, plating four runs off five hits to give Tech an 8-4 lead. A leadoff walk from Zoe Jones followed by back-to-back singles from Leach and Love loaded the bases for Hamlin who hit a hard shot at the third baseman that bounced off her body, allowing Jones to score. Whaley delivered another huge hit with a single through the right side that plated two more runs and moved Hamlin to third. Tech added an insurance run on a sac fly from Hamilton that scored Hamlin before a strikeout ended the Red Raider half of the inning.

Kansas tried to make things interesting with back-to-back singles in the bottom of the eighth, but Zoch capped off the career game with three more strikeouts to bring her total to 16 and give the Red Raiders their first conference win of the season.

Zoch (8-9) went the distance for Tech giving up four runs, three earned, on nine hits while striking out 16 and walking nine.

Hannah Todd (0-1) took the loss for Kansas after pitching the final two frames giving up five runs on nine hits in relief of Hailey Reed who pitched the first six innings.

Whaley and Burton each went 3-for-5 at the plate to lead the way offensively for Tech. Whaley and Hamilton tallied three RBI apiece.

Leach, Love and Hamlin all went 2-for-4 at the dish, accounting for a combined five of Tech’s eight runs scored.

All three of the Jayhaws runs came in the first inning, one by way of a bases loaded hit-by-pitch and the other two off a two-RBI single from Sophia Buzard that hit off the third base bag.

The Red Raiders had plenty of scoring opportunities early, leaving the bases loaded in the second and third innings, unable to push any runs across.

Kansas’ Hamilton was composed in the circle, working out of multiple jams and tossing a couple of three up, three down innings to preserve the shutout.

Despite the early mishaps, Edmoundson was strong in the circle for the Red Raiders, striking out a career-high 13 batters.

Edmoundson (7-8) pitched a complete game for Tech giving up three runs on three hits, walking two and hitting a couple of batters while striking out a baker’s dozen in the loss.

Hamilton (4-7) pitched a complete-game shutout for the Jayhawks, scattering just three hits while walking three and striking out four.