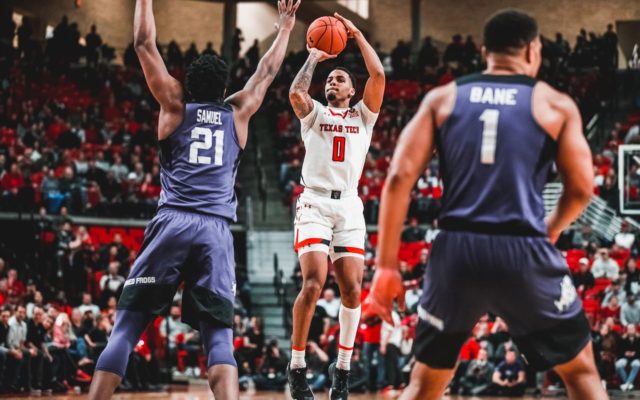 LUBBOCK, Texas – Texas Tech has been picked fifth in the 2020-21 Big 12 Men’s Basketball Preseason Poll with Baylor at the top of the rankings as voted on by the league’s head coaches.

Texas Tech finished last season with a 9-9 record in conference play which had them tied for third along with Oklahoma, Texas and West Virginia who all split their 18 conference games. Kansas won the Big 12 regular-season title with a 17-1 record followed by Baylor at 15-3. Baylor received seven first-place votes in the preseason poll and collected 79 points. Kansas picked up the other three first-place nods and totaled 73 points to place second. This is first time the Jayhawks have not been picked to win the regular season title since 2011-12. West Virginia, Texas and the Red Raiders rounded out the top five. Oklahoma was picked sixth, followed by Oklahoma State, Iowa State, TCU and Kansas State.

Texas Tech is scheduled to begin Big 12 play by hosting Kansas on Dec. 17 at the United Supermarkets Arena.

The Bears were picked second in the preseason poll in 2012-13, and again in 2019-20 but headline the preseason poll for the first time in their program’s history. Baylor’s outright second place conference finish last season was its highest in program history. The team was ranked in the top five of both national polls when the season concluded early due to COVID-19 while Kansas was rated first in both polls.

The Big 12 Preseason Polls began in the 1996-97 season with Tech being selected sixth. The Red Raiders were picked seventh in the 2018-19 preseason poll before going 14-4 to win their first Big 12 regular-season championship and were third in last year’s preseason poll for their highest preseason ranking in program history.

The Red Raiders return seven players from last year’s roster and welcome in seven newcomers on their roster of 14. Chris Beard returns for his fifth season as the program’s head coach and with a 94-34 record. Tech is led by senior Marcus Santos-Silva who transferred from VCU along with juniors Kyler Edwards and Avery Benson who were both on the 2019 NCAA Championship runner-up team. The junior class also includes transfers Jamarius Burton and Mac McClung, while sophomores Terrence Shannon, Jr., Kevin McCullar, Clarence Nadolny, Tyreek Smith and Joel Ntambwe bring back experience. The team is bolstered by the highest ranked freshman class in program history in Nimari Burnett, Micah Peavy, Chibuzo Agbo and Vladislav Goldin.

Santos-Silva was named the Big 12 Preseason Newcomer of the Year on Wednesday and Edwards and McClung were All-Big 12 Honorable Mention selections.

Release provided by Texas Tech Athletics
The season is scheduled to begin on Wednesday, November 25. The complete Red Raider schedule will be announced once completed.