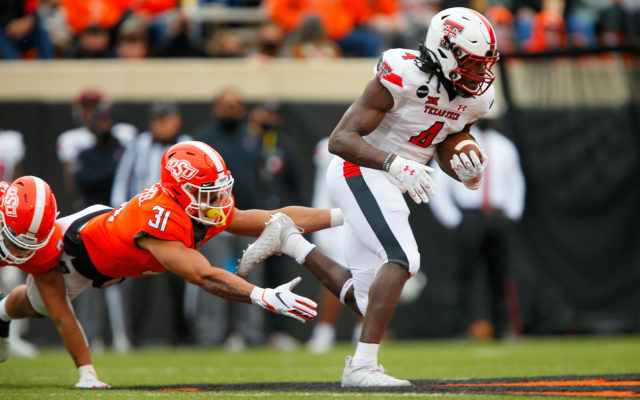 LUBBOCK, Texas – Throughout his two seasons as Texas Tech’s head coach, Matt Wells has stressed the importance of the football program being heavily involved in the Lubbock community.

That effort continues to be recognized at the national level as the Red Raider football programs recently learned it ranked second this past year in community-service hours among FBS schools that utilize the Helper Helper app.

“I’m proud of how our student-athletes continue to embrace this community, especially with the challenges this past year presented,” Wells said. “Our goal is to make a difference in the lives of others, and our student-athletes have definitely done that with their work throughout Lubbock and several deserving organizations. This will be a continued goal of our program each and every year.”

The Red Raiders completed more than 1,200 hours of community service this past year, which ranked only behind Boston College among FBS football programs. Texas Tech was No. 10 in community service hours served a year ago, a steady increase of 350 hours that saw the Red Raiders volunteer for 39 different opportunities with 19 organizations.

Even with the COVID-19 pandemic, the Red Raiders took precautions to make sure their community was served as Texas Tech continued its tradition of volunteering for a service project on the Friday before every home game. The Special Spectator program, meanwhile, moved to a virtual format, which allowed the Red Raiders to still reward a local student who has experienced a tragic life event, normally of a physical nature.

The Special Spectator program is a cornerstone of Texas Tech’s community outreach as it provides a two-day experience, in normal years, at a football practice, a tour of the Football Training Facility and Sports Performance Center as well as on-field field recognition prior to the start of a selected home football game. This year, the Red Raiders met each Special Spectator through a Zoom format.

Additionally, the Red Raiders have volunteered hours with local elementary and middle schools as well as the South Plains Food Bank, the Texas Boys Ranch and Habitat for Humanity, among others.

Texas Tech’s community efforts are coordinated through the J.T. and Margaret Talkington Leadership Academy as well as through Troy Kema, the Associate Athletics Director for player development and student-athlete services with the football program.

The leadership academy has worked to prioritize not only tracking departmental community service hours over the past two years but also increasing and continuing the commitment to outreach and engagement.