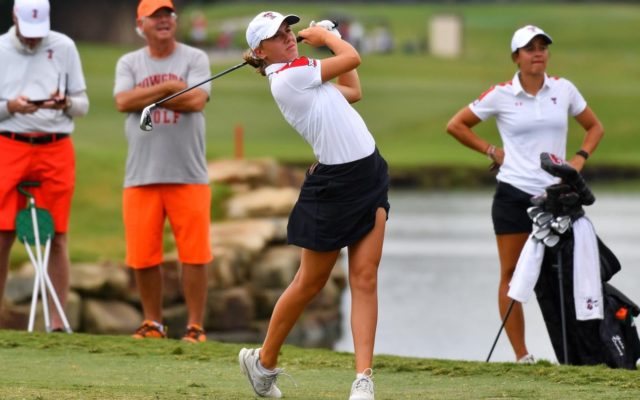 LUBBOCK, Texas – The No. 20 Texas Tech women’s golf team put the finishing touches on what could amount to be an important top-three showing Wednesday as the Red Raiders closed the Blessings Collegiate Invitational in third place overall.

Facing one of the most-competitive fields in college golf, the Red Raiders combined for a 5-over-par 293 final round to easily remain in third place, finishing at 17-over for the tournament only behind tournament host Arkansas at 9-under and second place UCLA at 10-over.

“This was a really good week for us,” head coach JoJo Robertson said. “We weren’t happy with the first round and to watch this team fight hard and finish the next 36 holes under par on a difficult course was really good to see. I’m proud of their efforts. We have a lot to look forward to this year with this team.”

The Blessings Collegiate, in only its second year, boasted one of the top fields in college golf and had a Golf Channel broadcast to back it, presenting a challenging layout at Blessings Golf Club in Fayetteville for the 10 teams, all of which competed on both the men’s and women’s side.

The top-three finish provided the Red Raiders a pair of head-to-head wins over fellow top-25 teams in the latest Women’s Golf Coaches Association poll as No. 9 Arizona finished fourth, eight back of Texas Tech, while No. 16 Ole Miss was fifth at 38-over for the tournament. Tech also scored a head-to-head win over a North Carolina program that is receiving votes in the poll.

The Red Raiders had three players among the top-15 individual finishers and one more just outside the top 25 with Gala Dumez and Anna Dong leading the group in a tie for fourth overall. The duo finished a combined 1-over for the tournament after Dumez led the Red Raiders over the final day with a 2-under 70 card, one stroke better than Dong.

Dumez and Dong combined for eight of Texas Tech’s 14 birdies on the round, giving the Red Raiders steady play at the top of the lineup. It marked the fourth top-five finish of Dong’s career and the second for Dumez, who previously won last spring’s Big 12 Championships.

Amy Taylor managed a 3-over round to drop to a tie for 11th overall at 3-over for the tournament, another impressive outing for the senior who has now finished among the top-20 individuals in all three events this season. Chiara Horder and Cecilie Nielsen rounded out the lineup with 5-over and 8-over cards, respectively, to finish in a tie for 26th and 38th overall.

The Red Raiders will have less than a week off before returning to tournament play next week at the Illini Collegiate. The two-day event begins Monday at Medinah Country Club, one of the most prominent private courses in the country.