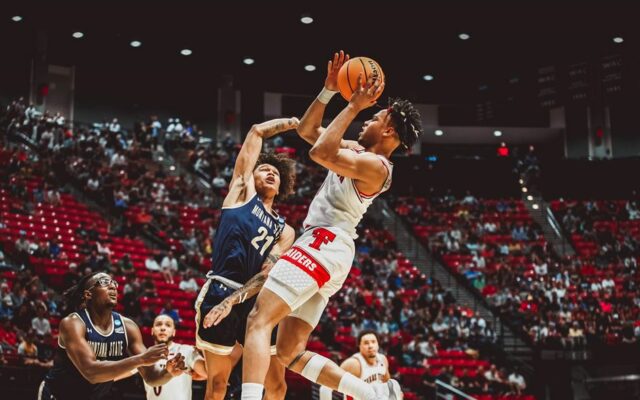 SAN DIEGO – Bryson Williams and Terrence Shannon, Jr. scored 20 points each while Kevin Obanor recorded a double-double as No. 3 seed Texas Tech ran away with a 97-62 win over Montana State in the NCAA Tournament First Round on Friday at the Viejas Arena. Tech advances to the second round of the tournament for the fourth straight season and will take on the Alabama-Notre Dame winner on Sunday in the West Region.

“I couldn’t be more thrilled with the way we played,” Texas Tech coach Mark Adams said. “It was one of our best games all year. We took Montana State very seriously. They are a very good program that is well-coached. We got out of the gate really well and had a great win. We can build on this. This team wants to play as long as we can.”

The Red Raiders (26-9) went on a 12-0 run after MSU scored the first points in the game on the way to setting a new program record for the most points and largest margin of victory in an NCAA Tournament game where they finished with a 66.7 shooting percent. Six players scored in double figures for Tech, led by Shannon and Williams who are the only teammates to both score 20 in the same tournament game in program history while Adonis Arms had 15 points and Obanor, Kevin McCullar and Davion Warren had 10 points. Shannon matched a career-high with six assists to go along with his 20 points.

“March Madness is unbelievable,” Williams said. “It’s a great stage. We try to feed our offense through our defense and did a great job with that today.”

Obanor recorded his third double-double of the season, the 33rd of his career and his fourth straight in the NCAA Tournament after he also had three last year while playing at Oral Roberts. Obanor led the Red Raiders with 11 rebounds to go along with his 10 points which came on 5 of 7 shooting. Williams was 8-for-10 from the field and 4-for-5 on 3-pointers to get to his 20 points, while Shannon had 15 at halftime and finished the game with three 3-pointers and going 7 of 8 at the free-throw line.

“My teammates found me when I was open,” Shannon said. “We all moved the ball pretty well today. We had a lot of assists and I just wanted to bring the energy to the game. I tried to do my best, play with energy, play good defense and find myself into the offense.”

Tech finished the game shooting 12-for-20 on 3-pointers for the most in a game this season, had a season-high 23 assists on 36 makes and owned a 38-16 scoring advantage in the paint. Arms added five rebounds and three assists, while McCullar had four assists and two steals. Chibuzo Agbo scored a career-high eight points after hitting two 3-pointers late in the game, including the final bucket of the game for Tech.

Texas Tech took a 52-25 lead into halftime by shooting 72.0 percent from the field, including going 7-for-10 on 3-pointers. Shannon led the Red Raiders with 15 points by going 3-for-4 on 3-pointers and also making 6 of 7 shots from the free-throw line. Obanor, Williams and Arms each had eight points in a half where Tech trailed for only 18 seconds and led by as many as 30. Seven players scored in the half where Tech was 18-for-25 from the field. MSU was limited to only 8-for-25 (32.0 percent) but did make five 3-pointers going into halftime. Gazelas had two 3-pointers and led the Bobcats with six points through 20 minutes.

Tech’s 52 points at halftime matched a season-high which it also had against Lamar, while the 27-point lead was its largest with 23-point advantages against Omaha and Eastern Washington being the previous season bests.

Montana State had its season end with a 27-8 record and a Big Sky championship. Tech is now 4-1 all-time against the Bobcats who were led by Xavier Bishop who scored 12 points.

Montana State won the tip but didn’t score on its first possession with a Shannon blocked shot to open the game… Tech also missed on its first possession with a Williams missed shot
Shannon scored Tech’s first points of the game with a 3-pointer followed by a McCullar steal and layup to take a 5-2 lead… Obanor made Tech’s next basket on a layup followed by another Shannon 3-pointer as Tech started the game with a 10-2 lead
Bishop stopped a 12-0 Tech run with a pair of free throws to take the score to 12-4 with 16:22 on the clock
Shannon hit his third 3-pointer to push Tech’s lead to 15-4 and give him nine early points
Arms hit Tech’s fourth 3-pointer of the game and his first basket for an 18-4 lead… Tech was 4-for-4 on 3-pointers to start the game and 9-for-10 from the field
Tech took a 30-9 lead coming out of the under-12 media timeout after a pair of Shannon free throws that gave him 13 points
MSU got a 3-pointer from Gazelas at the 8:14 mark to cut Tech’s lead to 33-17… Tech was 11-for-14 from the field going into the under-8 media timeout for the 16-point lead
Williams hit a 3-pointer to give Tech a 36-17 lead… Tech was 5-for-8 on 3-pointers to begin the game and Williams had five points after the shot with 7:13 remaining in the first half
McCullar hit a turnaround jumper to give Tech a 43-20 lead and push a run to 7-0 going into the final media timeout of the first half

Up 27 at halftime, Williams scored on Tech’s first possession of the second half with a left-handed hook and then a 3-pointer on the first two possessions to push the lead to 57-25
McCullar got to 10 points and had Tech leading 59-28 with a layup with 17:37 remaining… He was 5-for-5 to start the game after the shot
Williams had 17 points after back-to-back buckets that gave Tech a 65-30 lead with 15:16 on the clock… He was 7-for-9 from the field after the shots
Obanor got to his double-double with a layup that gave him 10 point and 11 rebounds and Tech an 89-56 lead with 4:08 to play