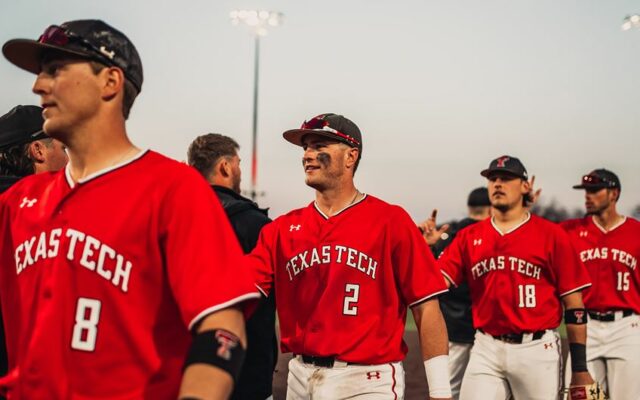 Tech recorded a season-high 16 hits, and Jace Jung provided a team-high three of them as he went 3-of-6 from the plate. In total, 11 different batters registered a hit in Friday’s offensive display. Zac Vooletich, Kurt Wilson and Hudson White joined Jung as batters with multiple hits (two apiece).

In his first start of the season, Vooletich led the Red Raiders with five RBIs. He hit a three-RBI double, a one-RBI single, and also plated a run by drawing a walk with the bases loaded.

Andrew Morris tossed 5.1 innings of nearly flawless baseball on the mound. He finished his third appearance of the season allowing one earned run, three hits, all while striking out eight against just one walk. His strikeout to walk ratio this season is 24 to 7.

The bullpen finished the game behind Andrew Devine, Brandon Beckel and Kyle Robinson. The group kept Merrimack scoreless and hitless collecting the final 10 outs of the game. Beckel and Robinson did not allow a runner on base while Devine walked three.

In the second and sixth innings, Texas Tech had an outpouring of five runs in each frame. The Red Raiders scored in six of the eight innings they sent batters to the plate with the first and eighth innings being the only two occasions TTU runners did not cross home plate.

Merrimack scratched across its one run in the sixth inning. An inning aided by three of the four walks issued in the game by the Red Raiders’ pitching staff. The run scored was on a bases-loaded walk as one of the three issued by Devine after Morris surrendered a lead-off single. He was lifted for Devine for the ensuing batter.

Quotable
Head Coach Tim Tadlock
On the fans…
“I really appreciate everybody coming out. I thought it was a great night for college baseball. Good weather, good crowd, the guys really appreciate it when people come to the ballpark. This is really the last weekend series you can catch this team till the end of March at home. We appreciate people supporting us.”

On Zac Vooletich…
“Zac has been working really hard. I felt like this was the time to get him in there and give him an opportunity … he has been a guy that’s always hit and put together good at-bats and he did that for the most part today.”

On the bullpen…
“I thought Beckel and Robinson threw the ball really good. That’s probably been the first time we’ve seen Robinson be the guy we saw when we recruited him. He had the fall off and that was a heavy fastball in the ninth, and that things gonna be hard to hit. Beckel was really efficient in the two innings he threw. He’s sitting there, 80-82 slider, and 90-94, those guys aren’t easy to hit.”

Junior Andrew Morris
On his approach to his start
“I try to have the same approach every game [regardless of the opponent]. They had competitive at-bats, and I wasn’t going to give them an inch. It was a good opportunity to work on stuff and refine my mechanics/pitches.”

On the first Friday at Rip Griffin
“[The atmosphere] was great. A lot of energy and these are the best fans in the country. It was a packed house, and it feels great knowing the fans are behind me.”

Up Next
The Red Raiders will continue their series against Merrimack on Saturday at Noon with the first of two games for a Saturday doubleheader. The series concludes Sunday afternoon at 1 p.m.