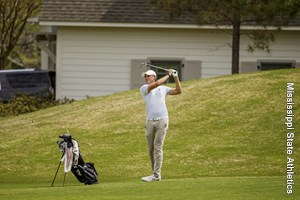 LUBBOCK, Texas – The Texas Tech men’s golf team has been selected to its 19th straight postseason where the Red Raiders will be the No. 4 Seed in the NCAA Albuquerque Regional at the Championship Course at UNM. The NCAA Division I Men’s Golf Championships is broken into six regional sites where teams will play 54-hole tournaments on May 17-19.

The Red Raiders are coming off a fifth-place finish at the 2021 Big 12 Championship last week at Prairie Dunes Country Club in Hutchinson, Kansas. It was the team’s seventh top-10 finish in 10 stroke play events this season, including a runner-up showing at the George Hannon Collegiate in Austin for its best result so far this season.

Ludvig Aberg has led the Red Raiders throughout the season and comes into the regional tournament at No. 5 in the World Amateur Golf Ranking. A sophomore from Sweden, Aberg has won two tournaments this season with victories at The Prestige in February and then by shooting 12-under in the regular-season finale to take medalist honors at the Thunderbird Collegiate in Phoenix. His 201 at the Thunderbird was the third lowest 54-hole score in program history behind on Hurly Long (197 – 2017 Carmel Cup) and Fredrik Nilehn (200 – 2017 Amer Ari Invitational).

Aberg currently has a 70.86 scoring average which is the third best in program history and has recorded nine sub-70 rounds this season. He has shot 65 in two different final rounds, first at the Cabo Collegiate with a 7-under, 65 final round to finish fifth overall in San Antonio and then at the George Hannon Collegiate where his 6-under, 65 put him third. He’s finished in the top-5 of five tournaments.

Senior Kyle Hogan is the only player on this year’s roster who competed in the 2019 NCAA Regional in Myrtle Beach. A Cypress native who earned All-America Honorable Mention last season, Hogan opened this year with a win at the Maridoe Collegiate by shooting 1-under to earn an exemption to compete in the PGA’s Houston Open. He is coming off a 19th-place finish at the Big 12 Championship and also claimed 13th at the Cabo Collegiate. Andy Lopez is in his third season at Tech and will compete in his first regional event. A senior from Plano, Lopez was named an All-America Honorable Mention selection last season and has secured two top-10 finishes this season. He earned sixth at The Aggie Invitational where he shot 75-71-71 (1-over) for his best showing of the spring after taking 10th at the Colonial Collegiate Invite where he closed the tournament by shooting a 5-under, 65 in his final round. Along with Aberg, sophomore Garrett Martin will be playing in his first regional tournament following a strong season. A San Antonio native, Martin finished 9th at the Thunderbird Collegiate to finish off the regular season and also took third at the George Hannon in Austin. The full lineup will be announced next week.

Team and individual medalist titles will be decided May 28-June 2 at Grayhawk Golf Club in Scottsdale, Ariz. Arizona State and The Thunderbirds are the hosts for the 2021 championships.