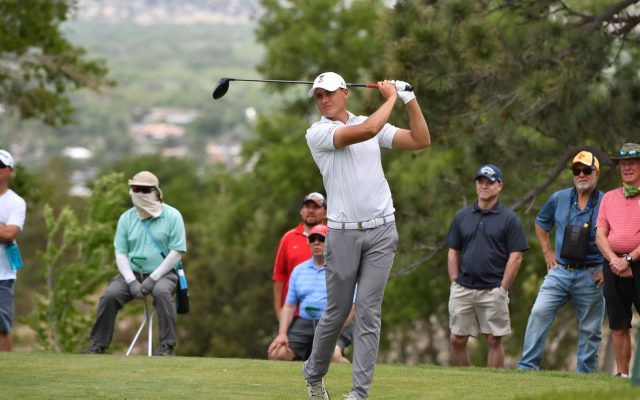 ALBUQUERQUE, New Mexico – Texas Tech will go into the second round of the NCAA Albuquerque Regional in second place at 5-under-par following a strong start on Monday led by senior Kyle Hogan and sophomore Ludvig Aberg shooting 2-under at the UNM Championship Course.

The No. 22 Red Raiders (283) are just two strokes back of tournament leader Oregon State which opened the postseason with a team score of 7-under, while New Mexico and Texas A&M are tied for third at 4-under. South Carolina and Arizona State are two back of Tech after posting 3-under followed by Nevada at 1-under. No. 1-ranked Oklahoma is tied for ninth after shooting 1-over on Monday which saw Tech get to 9-under before dropping back.

Aberg and Hogan are currently tied for ninth individually, while freshman Baard Skogen shot 1-under and is 19th. Tech sophomore Garrett Martin finished his first round at even-par which has him in 24th and senior Andy Lopez shot 3-over, 75 which has him in 47th going into Tuesday. Oklahoma’s Jonathan Brightwell leads the tournament after shooting 6-under on Monday and is followed by Nevada’s Sam Meek at 5-under.

Throughout the country there are currently six, 54-hole regional tournaments being played this week with the top five teams and the top individual not on one of those teams advancing to the DI Men’s Golf Championship. Each regional is scheduled to be completed on Wednesday. Team and individual medalist titles will be decided May 28-June 2 at Grayhawk Golf Club in Scottsdale, Arizona.

Aberg opened the first regional tournament of his career by shooting his 2-under with seven birdies on his first-round scorecard. A sophomore from Sweden, Aberg is currently at No. 5 in the World Amateur Golf Ranking and No. 31 in the Golfstat ranking coming into the postseason. He began his round with a bogey and would have five through the round. Aberg was at 4-under after reeling off four birdies on five holes before finishing his round with two bogeys and three pars. Hogan recorded his round of 2-under with a cleaner scorecard, finishing with four birdies and only two bogeys. A senior from Cypress, Texas, Hogan is playing in his second NCAA regional. He opened his round with two pars before a birdie on the par 4, 402-yard No. 12 hole on the course and would be at even-par through nine. He birdied No. 1 and No. 4 to move to 2-under and then birdied No. 9 to close out the round at 2-under.

Skogen would impress in his first regional appearance, getting as low as 3-under during his round and finishing the day with five birdies. He began the tournament with back-to-back birdies and was at 3-under after his third of the day on hole 15. Following two bogeys, he would birdie No. 1 and No. 3 to get back to 3-under before two more bogeys on 7 and 8. A par on his final hole closed out his round at 1-under. Martin finished his round at even-par with four birdies and five bogeys on his card. A freshman from San Antonio, Martin opened the day with a birdie on the par 4, 517-yard No. 10 hole on the course and was at 2-under after a birdie on No. 14. Lopez shot his 75 with two birdies and five bogeys to go along with 11 pars. He was at 4-over before closing out his day with a birdie on No. 9.

The Red Raiders are looking to advance to the program’s 13th NCAA Championship appearance with the most recent coming in 2018 where they finished as quarterfinalist in Stillwater, Oklahoma. Sands, who has led the team to 19 straight regional appearances, has guided the program to eight since 2002.