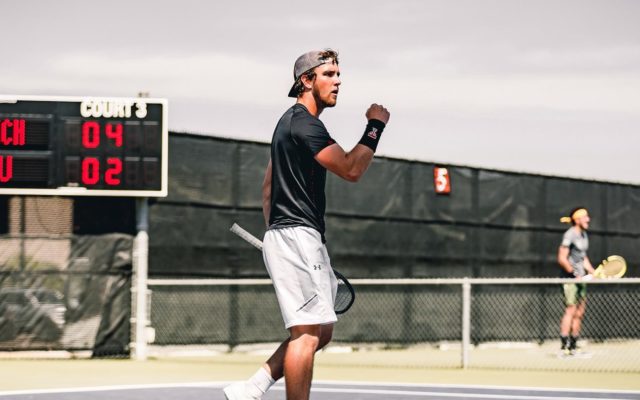 STARKVILLE, Miss. – The Texas Tech men’s tennis team defeated Tulane by a score of 4-3 in a neutral-site contest in Starkville on Saturday.

The Red Raiders improved to 4-3 on the season with Saturday’s win.

Tech began their afternoon by taking their first doubles point since their match against UTRGV on January 20th. Head coach Daniel Whitehead rolled out three new lineups for Saturday’s match, including freshman Reed Collier and senior Parker Wynn, who picked up the first victory for Tech on court two with a 6-2 win. Isaac Arevalo and Jackson Cobb secured the doubles point with a 6-2 win of their own at the primary doubles position.

In singles action, the Red Raiders fell behind early by dropping five of six first sets. Franco Ribero picked up the lone first-set victory for Tech in his first match since facing Abilene Christian in Lubbock with a 6-3 triumph on court five.

Tulane roared back to take the next three match points with a trio of straight-set victories. No. 64 Stewart of the Green Wave took down No. 63 Ilgiz Valiev at 6-0, 6-4 and was soon followed by a 6-4, 6-1 win by Erlenbusch over Collier on court four. The third point was taken by Esses on court five at a 6-3, 6-4 margin over Arevalo.

With the match-clinching point in the balance, the Red Raiders battled to take the final three points. Ribero notched his second win of the afternoon on court five in two sets, defeating Ruetzel 6-3, 6-3 before Wynn completed the comeback win over No. 49 Moore of Tulane at a 3-6, 6-3, 6-1 clip on court one. Wynn’s victory was the second over a ranked opponent this season and the first since he took down then-No. 78 Fenty of Michigan..

The decisive match point was provided by senior Bjorn Thomson at the anchor spot, coming back from a 2-6 deficit in the first set to take the match with a 6-3, 6-4 finish. Thomson’s victory represents a team-leading fourth singles win in dual match play.

UP NEXT:
The Red Raiders will compete in a pair of matches tomorrow as they take on No. 20 Mississippi State at noon before making the short trip to Greenville to face Mississippi Valley State at 8 p.m. CT.