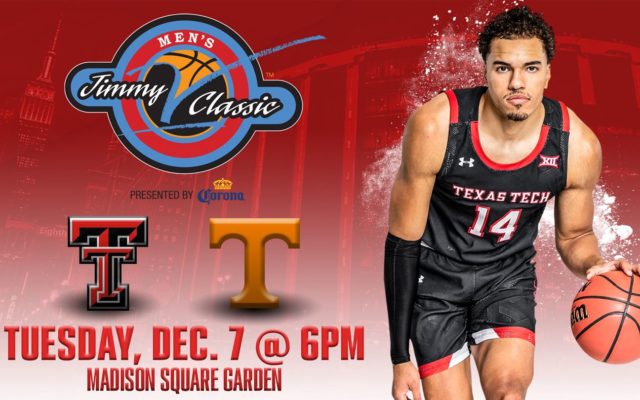 LUBBOCK, Texas – Texas Tech is returning to Madison Square Garden where it will play Tennessee in the 2021 Jimmy V Classic Presented by Corona on Tuesday, December 7 in New York. The Red Raiders and Volunteers are set for tipoff at 6 p.m. (CST) on ESPN and will be followed by a matchup between Syracuse and Villanova.

The Jimmy V Classic, named for legendary college men’s basketball coach and former ESPN commentator Jim Valvano, annually raises money and awareness for the V Foundation for Cancer Research, which was founded by Valvano in 1993 to fund game-changing cancer research and scientists to eradicate the disease. ESPN officially announced the event on Wednesday.

Tennessee is coming off a trip to the NCAA Tournament and a season where it finished with an 18-9 overall record and were 10-7 in SEC play before having its season end with a 70-56 loss to Oregon State in the first round of the tournament. The Volunteers are led by Rick Barnes who is entering his seventh season in Knoxville after 17 years at Texas. The Vols are 15-18 all-time against Big 12 opponents after securing an 80-61 win over No. 15 Kansas in the Big 12/SEC Challenge at home.

The Red Raiders are 1-0 all-time against Tennessee with the last matchup coming in 1953 when Polk Robison led his team to an 88-71 win over the Volunteers in Knoxville. Texas Tech is currently 132-144 all-time against current SEC schools following its 76-71 win over LSU last season in the Big 12/SEC Challenge in Baton Rouge before falling to Arkansas in the second round of the NCAA Tournament at Hinkle Fieldhouse in Indianapolis.

Along with playing Tennessee, Texas Tech is also slated to take on Mississippi State on Saturday, January 29 in a Big 12/SEC Challenge matchup in Lubbock. The Red Raider schedule also includes playing Gonzaga at the Jerry Colangelo Classic on Saturday, December 18 in Phoenix and matching up against Providence in the Big 12-BIG EAST Battle on December 1 in Rhode Island. The complete schedule will be announced when completed.

ABOUT THE JIMMY V CLASSIC
The men’s classic began in 1995, while the women’s event debuted in 2002. Both events are part of ESPN’s V Week initiative, which utilizes platforms to provide important messaging to sports fans about the importance of cancer research. To date, ESPN has helped raise more than $134 million dollars for the V Foundation.