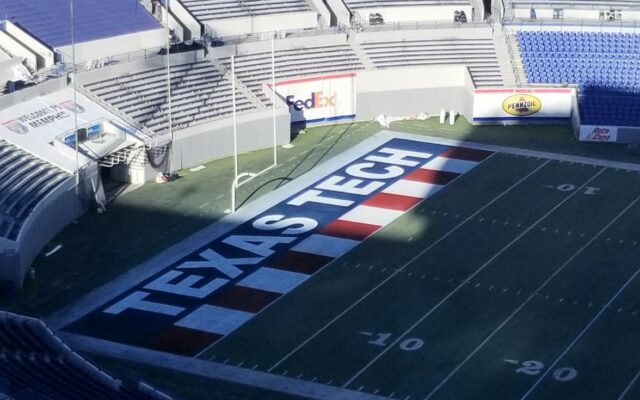 A totally dominant performance for the Red Raiders as they held Mississippi State to 7 points, the only other team to hold them to 10 points or less… Alabama.

• Mississippi State won the coin toss and chose to receive in the second half. Texas Tech started the first half with the ball.

• Today’s game was televised by ESPN. Ten of Tech’s games during the 2021 season were on the ESPN family of networks.

• Today’s game marked the first meeting with Mississippi State in 50 years. Today’s game was the eighth all-time meeting between the two schools with the last being in 1970.

• As part of Texas Tech’s pregame entrance, T.J. Storment carried the U.S. flag and Tony Bradford Jr. ran out with the state of Texas flag.

• Gives Texas Tech a 7-5 record against unranked opponents in bowl games since joining the Big 12 (1996).

• Today’s win over Mississippi State clinched Tech’s first winning season since 2015 when the Red Raiders finished 7-6 overall after a loss in the Texas Bowl.

• Today’s victory marked the fourth road win for Texas Tech in 2021. Its’ most wins away from Lubbock since 2017.

• Texas Tech held a bowl opponent to single digits for points for the first time since the 1974 Peach Bowl (6-6 tie with Vanderbilt) and only the fifth time in its now 39 all-time bowl appearances. Ironically, this is Texas Tech’s first-ever win when holding an opponent to single-digit points as the Red Raiders were previously 0-3-1 historically.

• Texas Tech shutout its opponent in the second half for the first time the 2021 season opener versus Houston.

• Texas Tech scored on its first two possessions for the second time this season.

• Second-half adjustments: The Red Raiders have allowed its last seven opponents to score a collective three points with its opening drive of the second half.

• Mississippi State entered the game averaging 449.6 total yards offense per game. Texas Tech held the Bulldogs to 128 yards in the first half, and a total of 344 yards overall.

– his 15 makes tied for the 10th-most in single season history by a Red Raider.

– eclipsed 100 yards rushing for the third time in his career.

– scored his seventh rushing touchdown of the season, and found the end zone for the third game of the last four. It was his 11th career rushing score.

– second Red Raider to be named bowl game MVP, in addition to Davis Webb in 2013 at the Holiday Bowl.

– recorded his second interception of the season

– added 2.0 TFLs to his resume -completing his career with 58.5 TFLs for his career.

– his eight solo tackles pushed him into the all-time FBS Top Five in solo tackles, finishing No. 4 with 315.