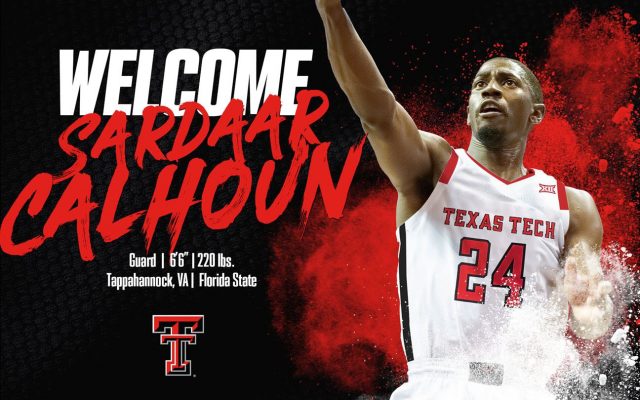 LUBBOCK, Texas – Texas Tech head coach Mark Adams has officially announced the signing of Sardaar Calhoun to a financial aid agreement. Calhoun is transferring in from Florida State University and will have two years of eligibility remaining to play for the Red Raiders.

A Tappahannock, Virginia native, Calhoun played for the Seminoles one season after starting his collegiate career at Missouri State University – West Plains where he would average a program record 18.6 points per game and finished second in the program’s all-time records with 1,075 points, 183 3-pointers and shooting 44.3 percent on 3-pointers in his two seasons.

Calhoun, a 6-foot-6, 220-pound guard, played in all 25 games for Florida State during its run to the NCAA Sweet 16 last season, including scoring a season-high 16 points at Miami and 12 against Notre Dame in the regular-season finale. He went 4-for-5 on 3-pointers against Clemson where he had 13 points and finished the season with 23 3-pointers (39.7 percent). Calhoun played a reserve role in all 25 games for the Seminoles who went 18-7 overall and 11-4 in ACC play. He would finish the season averaging 5.3 points in 14.2 minutes played per game.

At Missouri West Plains, Calhoun would average 18.6 points, 4.7 rebounds and 1.2 assists through 59 games. He set a program record with a 48-point performance and earned Missouri Community College Athletic Conference First Team All-Conference and NJCAA Region 16 First Team honors. As a sophomore, he shot 45.6 percent on 3-pointers and made four or more 3s in 11 games.

Calhoun graduated from the Blue Ridge School in St. George, Virginia we he played two seasons, leading the team to two VISSA Division II State Championship titles. As a senior he would average 13.6 points, 5.2 rebounds and 1.4 assists through 29 games. He earned All-State honors as a senior after a junior season where his team went 30-3 and he averaged 12.8 points and 3.6 rebounds per game. He began his prep career at Essex High School where he averaged 18.0 points, 8.5 rebounds and 5.0 assists before transferring to Blue Ridge.