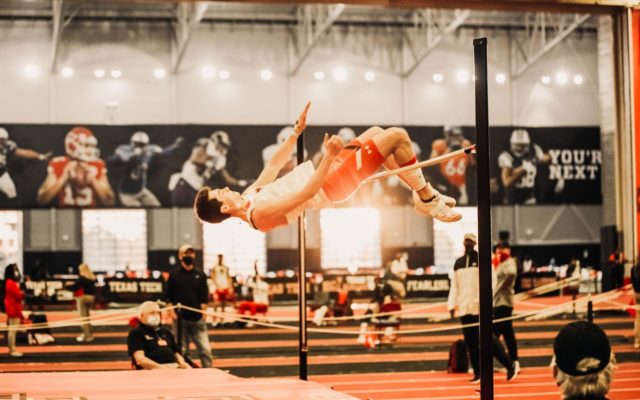 After having his middle distance runners compete in various open events throughout the season, head coach Wes Kittley called upon four for the team’s first distance medley relay of the year with the goal of qualifying it for the NCAA Indoor Championships. He enlisted Owen Likins, Chancellor Stephenson, Sven Cepus and Takieddine Hedeilli for the effort. The foursome executed their game plan perfectly, with Likins going even faster than hoped on the opening leg. Stephenson ran a strong 400m, and Cepus did well in the 800m. Hedeilli closed with a four-minute mile to set the time at 9:36.72 – toppling the eight year-old record school record of 9:40.71. Altitude adjustments will shave another five-plus seconds off of Tech’s time, bringing them into the 9:31 range and a top-five spot in the NCAA this season.

The relay did it all while racing alone.

“The DMR was just fantastic,” said Kittley. “I’m very proud of this group. It’s just unbelievable how all of them were able to manage by themselves in a pressured situation.”

Over at the high jump, Jack Scarborough enjoyed the best day of his career thus far. The junior cleared three bars up to 6’-11.5” (2.12m) without a single miss. Then, staring down a career-best height of 7’-1.5” (2.17m), he went over cleanly again. He would go out at the next bar – set one inch higher – but he would leave satisfied knowing he turned in the best performance of his career at a critical time in the season. His new PR moves him from 13th nationally to 10th – three more spots inside the top-16 cutoff for the national meet.

“Every jump is different,” said Scarborough. “Sometimes you start just clearing easy, sometimes you’re barely scraping over the bar. Today I got in a rhythm and it was nice to stick a good one at the right time.”

Elsewhere, Gabe Oladipo continued his strong indoor campaign with yet another weight throw mark over 20 meters. While his 68’-8” (20.93m) distance would not move him up from his current ranking of fifth in the nation in the event, it would go down as the sixth-farthest throw in school history. In just two indoor seasons at Tech, Oladipo has claimed nine of the program’s top-10 all-time marks.

Seasons Usual completed the Tech sweep in the event, winning the women’s side. The defending Big 12 Champion had a top distance of 66’-7” (20.29m).

On the track, Tech’s hurdles group continued to show steady improvement heading into the conference meet. Gabrielle McDonald was again the pack leader, running 8.31 in the prelim before going 8.30 in the final. Behind her, Demisha Roswell continued to work down her time, finishing today with an 8.32. Since transferring to Tech from New Mexico JC, Roswell has gone from 8.52 to 8.48 to 8.42 to 8.32 in four races as she continues to move up the Big 12 leaderboard just two meets as a Division I runner. Simone Watkins also looked good in the hurdles, PR’ing at 8.46.

Another PR on the track came in the mile, where Paul Sherrill would turn in 4:16.27.

The Red Raiders will set their sights on the Big 12 Indoor Championships, to be hosted Feb. 26-27 right in Lubbock at the Sports Performance Center. The meet will be streamed live on Big 12 Now on ESPN+.