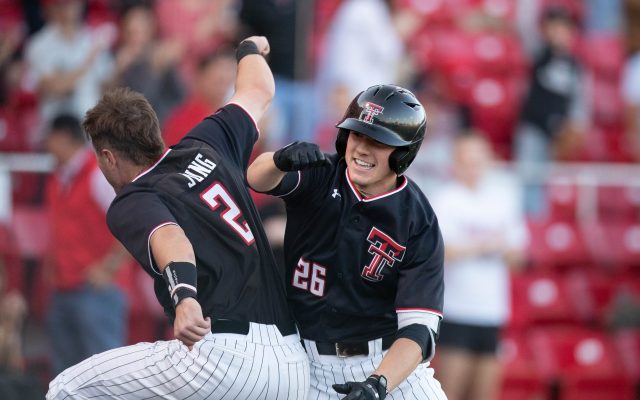 LUBBOCK, Texas – Texas Tech’s success on the baseball diamond resonated with professional scouts Monday as a school-record seven Red Raiders were selected within the top-10 rounds of the Major League Baseball Draft.

The Red Raiders are currently tied with Florida for the most MLB Draft selections entering Tuesday’s final day of the MLB Draft, which features rounds 11-20. Texas Tech’s seven selections easily lead the Big 12 Conference as the trio of Arkansas, Louisville and South Carolina are tied for third with six draft picks followed by Tennessee, UCLA and Vanderbilt with five each.

The Red Raiders snapped the school record for most top-10 picks in a single draft midway through the action as Texas Tech’s previous high was four from the 2018 and 2019 events. It marked the 34th-consecutive year Texas Tech recorded multiple draft picks, which is easily the longest streak in the Big 12.

Cal Conley and Dru Baker were the first Red Raiders off the board in the fourth round as the Atlanta Braves used the 126th pick to select Conley followed by the Tampa Bay Rays five selections later to choose Baker. The Rays utilized another pick later in the day on Mason Montgomery in the sixth round at pick No. 191 overall, marking the first time the franchise has used multiple picks on Red Raiders in its history.

Braxton Fulford preceded Montgomery earlier in the sixth round as the Colorado Rockies selected the Lubbock native at No. 170 overall. A trio of Tech arms completed Texas Tech’s day as Ryan Sublette went No. 222 overall (seventh round) to the Los Angeles Dodgers, while Hunter Dobbins was chosen at No. 226 early in the eighth round by the Box Red Sox and Patrick Monteverde at No. 239 to the Miami Marlins.

Texas Tech has now had at least one Red Raider selected in the top-five rounds in each of the last four drafts under head coach Tim Tadlock. During that span, Texas Tech has had seven Red Raiders picked in the first five rounds as Conley and Baker join a list that includes 2020 draftees Clayton Beeter (CBB – No. 66) and Bryce Bonnin (third round), 2019 first rounder Josh Jung (No. 8 overall) and 2018 picks Grant Little (CBB – No. 74) and Steven Gingery (fourth round).

Coverage of the final day of the MLB Draft will resume at 11 a.m. Tuesday morning on MLB.com.