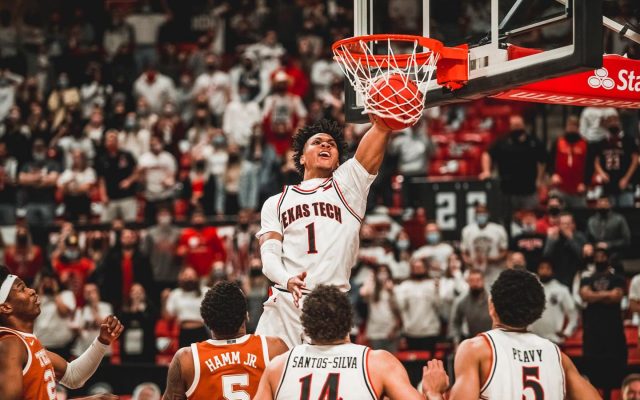 LUBBOCK, Texas – Texas Tech sophomore Terrence Shannon, Jr. has announced his intentions to enter the 2021 NBA Draft without the representation of an agent at this time. Under NCAA rules, Shannon has the option to enter the draft process where he can be evaluated, receive feedback but still return to school if he decides to. The deadline to withdraw is Monday, July 19.

Shannon earned All-Big 12 Third Team honors in his second season with the Red Raiders where he averaged 12.9 points, 4.0 rebounds and 1.1 steals per game. A Chicago, Illinois native, he was also named to the Academic All-Big 12 Second Team and is a finalist for the Julius Erving Award after earning Big 12 All-Freshman Team honors last season.

In a twitter post, Shannon made the announcement by thanking his teammates and coaches and addressing the Red Raider fan base.

“I have decided to pursue my lifelong dream of playing in the NBA and am entering my name in the 2021 NBA Draft,” Shannon said. “This was not an easy decision to make, but one that I feel is best for me at this time. Again, my love for Lubbock, my teammates and Texas Tech are unmatched and I can’t say thank you enough.”

A versatile guard for the Red Raiders, Shannon scored in double figures in 22 games this season including leading Tech with 20 points against Arkansas in the NCAA Tournament Second Round. He scored a season-high 23 points and recorded a double-double with 10 rebounds in the win at LSU and also went over 20 points in wins over Oklahoma and Kansas State. Shannon finished his sophomore season with 30 3-pointers after going 3-for-4 against the Razorbacks in the final game of the season after matching a career-high with four 3-pointers in the Big 12 Championship quarterfinals against Texas.

Through two seasons at Tech, Shannon has scored 644 points, grabbed 231 rebounds and came away with 58 steals. He averaged 9.8 points per game as a freshman, including scoring a career-high 24 points at DePaul. Along with his scoring, Shannon had 39 assists this season (1.4 per game) highlighted by a career-high six assists in the road win at Iowa State.

Shannon joins Jahmi’us Ramsey, Jarrett Culver and Zhaire Smith who declared for the NBA Draft as Red Raider underclassmen in the past four seasons. Smith entered the draft after his freshman season (2017-18) and was selected No. 16 followed by Culver who left Texas Tech following his sophomore season (2018-19). Culver was picked at No. 6 by Phoenix before a draft-night trade that sent him to Minnesota where he is averaging 9.2 points, 3.4 rebounds and 1.7 assists through 63 games. Ramsey, who was in the same freshman class as Shannon, was selected in the second round of the 2020 NBA Draft by the Sacramento Kings. Texas Tech has had 25 players selected in the NBA Draft in program history, including first-round selections of Smith (16), Culver (6) and Tony Battie who was taken at No. 5 in the 1997 draft by Denver.

The NBA Draft is scheduled for July 29 at the Barclays Center in Brooklyn, New York.