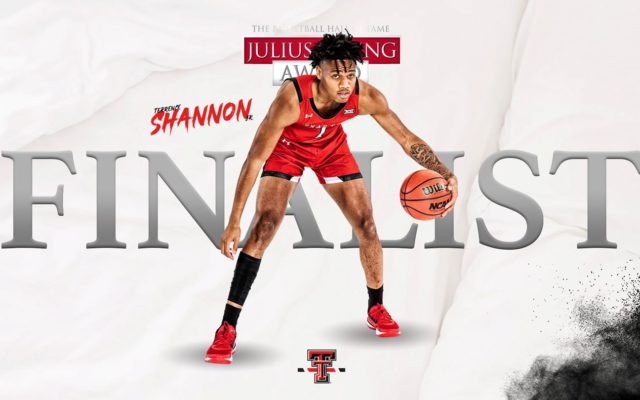 LUBBOCK, Texas – Texas Tech sophomore Terrence Shannon, Jr. is one of the top-10 candidates for the 2021 Julius Erving Small Forward of the Year Award which was announced on Wednesday by the Naismith Memorial Basketball Hall of Fame.

A Chicago, Illinois native, Shannon is currently averaging 12.9 points, 5.2 rebounds, 1.3 steals and 1.3 assists per game in his second season with the Red Raiders. He scored a season-high 22 points in a home win over Kansas State and also went for 21 points in the road win at Oklahoma and 20 points against Kansas in the conference-opener. He is coming off a 15-point, 8-rebound performance on Monday at No. 11 West Virginia and is now averaging 14.8 points and 6.0 rebounds through eight games Big 12 play.

Named after Class of 1993 Hall of Famer and 16-year professional basketball player Julius Erving, the annual honor in its seventh year recognizes the top small forwards in Division I men’s college basketball. A national committee of college basketball personnel determined the watch list of 20 candidates in November, which has now been narrowed to 10.

Julius Erving attended the University of Massachusetts and averaged 26.3 points and 20.2 rebounds per game, making him one of only six NCAA men’s basketball players to average more than 20 points and 20 rebounds per game. After two seasons, Erving made the jump to the American Basketball Association and was the league’s most recognizable player when it merged with the National Basketball Association in 1976. During his professional career, Erving won three championships, four most valuable player awards and three scoring titles. In 1996, he was named a member of the NBA’s 50th Anniversary All-Time Team.

In late February, five finalists will be presented to Mr. Erving and the Hall of Fame’s selection committee. The winner of the 2021 Julius Erving Award will be presented April 9, 2021, along with the other four members of the Men’s Starting Five. Additional awards being presented include the Bob Cousy Point Guard Award, the Jerry West Shooting Guard Award, the Karl Malone Power Forward Award and the Kareem Abdul-Jabbar Center Award, in addition to the Women’s Starting Five. College basketball fans can support their favorite players by participating in Fan Voting presented by Dell.

For more information on the 2021 Julius Erving Small Forward of the Year Award and the latest updates, log onto www.hoophallawards.com and follow @hoophall and #ErvingAward on Twitter and Instagram. Starting Five Fan Voting presented by Dell Technologies will go live on Friday, January 29 on HoophallAwards.com.