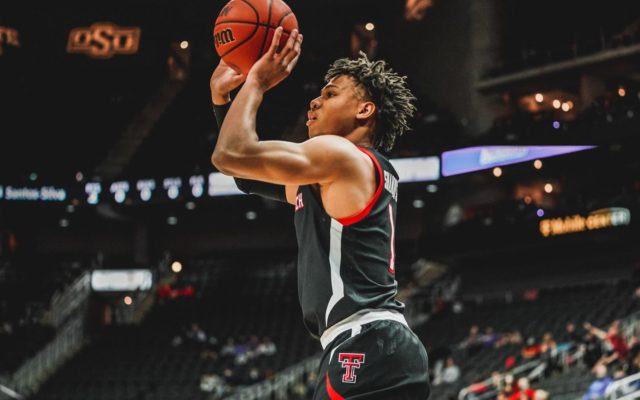 LUBBOCK, Texas – Texas Tech junior Terrence Shannon, Jr. has been selected to the Preseason All-Big 12 Team which was released on Wednesday and reflects the votes from the league’s head coaches.

Shannon is joined on the Preseason All-Big 12 Team by Kansas’ Remy Martin, Texas transfer Marcus Carr, Baylor’s Matthew Mayer, Kansas’ Ochai Agbaji and David McCormack. Three of the selections were honored on the 2020-21 All-Big 12 teams as McCormick was a second team pick while Shannon was on the third team and Agbaji was honorable mention. In the superlative categories, Martin was selected Preseason Player of the Year, Carr picked up Newcomer of the Year and Baylor’s Kendall Brown was named Freshman of the Year.

A 6-foot-6 guard from Chicago, Shannon is entering his third season with the Red Raiders where he has averaged 11.3 points and 4.1 rebounds per game through 57 games in his career. Shannon went through the NBA Draft Process throughout the summer before deciding to return for his junior season. He is coming off a sophomore season where he was second on the team by averaging 12.9 points per game and also added 39 assists and 32 steals. Shannon scored a season-high 23 points in a road win over LSU and would lead Tech with 20 points against Arkansas in the second round of the NCAA Tournament.

Shannon is the sixth Red Raider to earn a spot on the Preseason All-Big 12 Team and the first since Zach Smith in the 2017-18 preseason. Cory Carr was the first Texas Tech player to earn selection in 1997 and was followed by Andre Emmett who earned it twice in the 2002-03 and 2003-04 poll. Jarrius Jackson secured a selection in the 2006-07 year and then Smith. Marcus Santos-Silva, who is returning for his super senior season for the Red Raiders, was named the Preseason All-Big 12 Newcomer of the Year last season.

Martin will play his final season at KU after transferring from Arizona State. He was a three-time All-Pac-12 selection, earning second team honors as a sophomore and first team his junior and senior seasons. In 2020-21, Martin led the Pac-12 with 19.1 points per game, including 21.5 ppg in conference play. The 6-0 guard has career totals of 1,754 points, 466 assists, 151 steals and 176 three-point field goals made. Carr transferred to Texas after spending the last three years at Minnesota and one season at Pittsburgh. The 6-2 guard owns three-year collegiate totals of 1,361 points, 477 assists and 370 rebounds in 92 career games (87 starts). He was a two-time All-Big Ten selection, earning first-team honors as a junior and third-team recognition as a sophomore. Brown, a five-star forward out of Sunrise Christian Academy in Bel Air, Kansas, was ranked 12th nationally and No. 3 at the small forward position in the 247sports.com composite rankings. He was named to the 2021 USA Nike Hoop Summit Team and participated in the 2021 USA Basketball Men’s U19 World Cup team training camp.

The Preseason Poll will be announced Thursday.