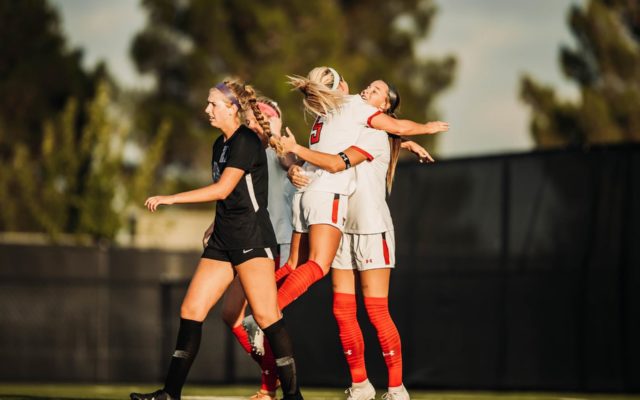 Ashleigh Williams’ three goals this year have all been game-winners

TUCSON, Arizona – No. 21 Texas Tech extended its winning streak to five with a 2-1 win over Arizona with Kirsten Davis and Ashleigh Williams scoring goals on Thursday in its first game in the Wildcat Invitational at the Mulcahy Soccer Stadium.

The Red Raiders (6-0-1) opened their two-game road trip to Tucson with Davis striking first for her 36th career goal before Williams scored her third goal of her freshman year for a 2-0 lead. TTU finished the game with a 19-10 total shots advantage, including a 7-6 shots on goal margin. Davis scored her goal in the 49th minute where she essentially went coast-to-coast for an unassisted goal, while Williams scored the game-winner in the 62nd minute off an assist from Davis. The Wildcats fell to 2-3 with the loss.

“We knew this was going to be a big challenge. We head into the PAC 12 with two athletic, very skillful, very well-coached teams,” head coach Tom Stone said. Arizona is going through a transition with Becca [Moros] who has done a fantastic job with this group, and this is a tough team to beat at home.”

The Red Raiders will return to action against Arizona State at noon (CST) on Sunday Murphey Field at Mulcahy Soccer Stadium in Tucson before returning to Lubbock to host Eastern Washington on Sunday, Sept. 19 at the Walker Soccer Complex. Arizona State improved to 6-1 on its season with a 1-0 win over Nebraska on Thursday in the first game of the Wildcat Invitational.

“I think the turning point was Madi White made two absolutely phenomenal saves – I mean as good as a college goalkeeper can make a save, she did that twice. On that backend of the second one, it led to a clearance that went to Kirsten Davis, who went one against three of their defenders, beat them all, and scored the goal that put us ahead.”

Madison White recorded a season-high five saves in goal in the win for the Red Raiders with the Wildcats scoring their lone goal in the 75th minute off a strike from Marley Chappel.