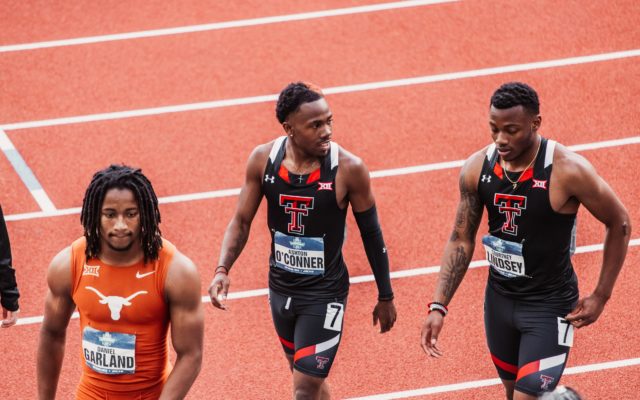 LUBBOCK, Texas – Texas Tech’s first day of competition at the NCAA Outdoor Championships resulted in a finals bid for its 4×100 relay.

The 4×100 got things underway on a positive note, clocking 39.14 to earn a lane in Friday’s final. The relay was led off by Courtney Lindsey, who went to Jacolby Shelton then on to Ashton O’Conner with Terrence Jones, Jr. The foursome, running together for just the second time this season, timed the 11th-fastest time in school history. Their 39.07 from the NCAA West Preliminary was 10th-fastest.

“I thought we did enough to get it through,” said assistant coach Calvin Robinson. “We will definitely have to execute and run better to show what kind of team we really have in the finals. I’m looking forward to watching this group come together and get it done.”

Lindsey and Shelton were not finished, however. Lindsey had a one-hour turnaround before running the 100m, then another hour after that he ran the 200m. Lindsey’s 100m resulted in a 10.33, while Shelton joined him with a 10.50. Both times were outside of at-large range. Lindsey ran his 200m in 20.76, finishing 15th in the semifinal. Terrence Jones, Jr., did not run the 200m semi.