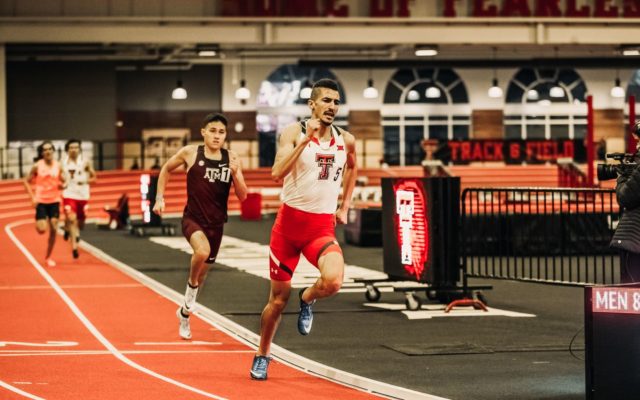 COLLEGE STATION, Texas – On the opening day of a meet where earning lanes to race again is the biggest priority, Texas Tech earned seven of them. The Red Raiders saw runners through to the quarterfinals of the NCAA West Preliminary in the 100m, 200m, 800m and 110m hurdles.

Jacolby Shelton and Courtney Lindsey advanced to Friday’s quarterfinal 100m races. The two were drawn in the same heat, along with Ashton O’Conner, and had to fight for three automatic bids or hope to get in on time. Shelton pulled ahead to take second with a 10.24, claiming one of the heat’s three auto bids. Lindsey was just one one-hundredth of a second from joining him in third, but was edged out by Wisconsin’s Lawrence Johnson. Lindsey’s 10.28, however, was enough to get him an at-large spot. O’Conner timed 10.35, placing him five-hundredths outside of the top-24.

A little over an hour after the 100m, Lindsey came back to run the 200m. He timed 20.46 with wind – the third-fastest time of the first round. The time put him across second in the first heat, in which he was immediately followed by Karayme Bartley, whose third-place finish netted him an auto bid as well. Bartley clocked 20.70. A heat later, Terrence Jones Jr. ran 20.58 – just nine one-hundredths from a PR. Running in the fastest heat of the day, he crossed fourth and would need to get through on time. Fortunately, his 20.58 was the 10th-fastest of any competitor.

Maliek Kendall ran a near-PR 13.79 in the 110mH to claim a Friday lane. It was the second time he has dipped below 14 seconds in his career, both coming this season. Kendall ran 13.74 with wind at the Corky/Crofoot Shootout, but his top wind-legal race of the year was his 14.05 PR run in the prelims at the Big 12 Championships.

Kyle Stifflemire represented the men’s pole vaulters, and did so with the best clearance of his career. Stifflemire topped at a personal-best 17’-2.75” (5.25m), making him a 17-footer for the first time in his career. The sophomore, who holds freshman eligibility outdoors, earned the spot at regionals after a big career-best 16’-11” (5.16m) at the season’s final home meet. He would go on to score at conference as well.

Chancellor Stephenson ran the 400m in a fast heat that claimed three auto bids and two of the six available at-large bids to the quarterfinals. Stephenson timed 47.29, closing the book on a strong Tech career for the quarter-miler.

Thursday, the second day of the West Preliminaries, will serve as the opening day of women’s competition. Tech’s entrants will begin competing at 1:30 p.m., and the meet will stream live on SEC Network+ at 6 p.m. Live results will be available here.