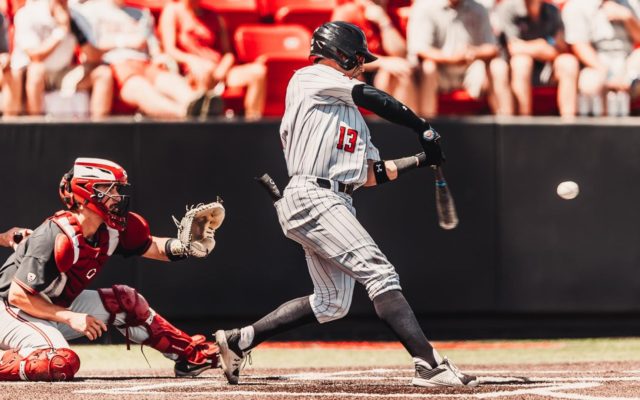 Beck (9-1), the Pac-12 Pitcher of the Year, limited a normally dangerous Tech lineup throughout the afternoon, giving up only a pair of runs off six hits and a career-high 13 strikeouts in 7.1 innings en route to handing the Red Raiders (39-16) their first loss this postseason.

In fact, the loss marked only the second in a Super Regional opener all-time for the Red Raiders, who previously overcame an 8-6 setback to East Carolina in 2016 to win each of the next two games for their second appearance at the College World Series. Tech is 4-0 all-time in Super Regional series after also overcoming losses over the course of a weekend set to Duke (2018) and Oklahoma State (2019).

Cole Stillwell drove in the first two runs for the Red Raiders as he sent a solo home run over the fence in left in the fourth before following with an RBI single to score Jace Jung in the sixth. Jung previously connected on a two-out triple earlier in the sixth and then walked to chase Beck with one out in the eighth. Nate Rombach connected on his ninth home run of the season in the bottom of the ninth to cut the deficit to 12, but it would be too late.

The walk to Beck was one of just two free passes allowed by Beck, who plunked Cal Conley with a pitch in the fourth. Beck kept Tech off-balanced throughout the afternoon, punching out 13 Red Raiders before giving way to Austin Weiermiller for the final 1.2 innings. It marked the most strikeouts by a Tech opposing pitcher this season.

Stanford (37-15) scored four runs in the opening frame before Beck even took the mound, utilizing key two-out hitting with three-straight RBI singles from the likes of Nick Brueser, Drew Bowser and Tommy Troy. Tim Tawa homered earlier in the frame, one of three Cardinal home runs on the day as Brueser and Bowser drove solo blasts in the sixth and ninth innings each.

The Cardinal scored 11 of its 15 runs over the final four frames, matching the most runs ever allowed by the Red Raiders in a NCAA Tournament game. Tech previously surrendered 15 runs versus No. 1 Rice during the 1999 NCAA Lubbock Regional and then against Michigan to wrap its stay at the 2019 College World Series.

The early run support from Stanford chased Tech starter Chase Hampton (4-1) in only the fourth as the freshman suffered the first loss of his career after giving up four runs off five hits over his 3.2 innings. Tech was unable to stop the damage from there, though, as the bullpen, which surrendered just one earned run over the regional round, allowed 11 runs (seven earned) the rest of the way.

Tech will send left-hander Patrick Monteverde (7-3) to the mound Saturday when the Red Raiders look to even the series in a 2 p.m. first pitch. Television coverage will be provided again on ESPNU.