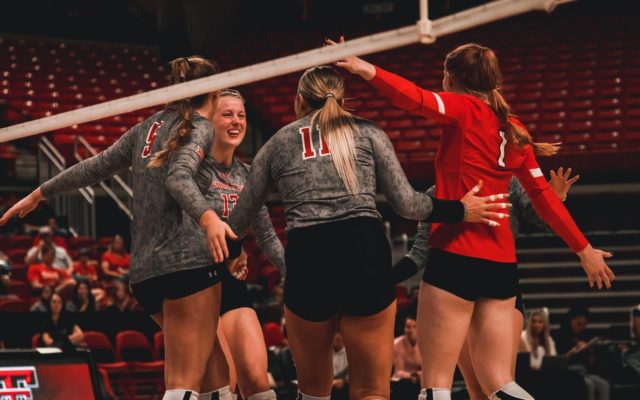 The Red Raiders defeated Rhode Island 3-0 and fell to No. 6 Ohio State 0-3 Saturday in the Red Raider Classic.

LUBBOCK, Texas – The Texas Tech volleyball team wrapped up the Red Raider Classic defeating Rhode Island and falling to sixth-ranked Ohio State Saturday at United Supermarkets Arena. The Red Raiders finished the tournament with two wins and one loss, moving to 5-2 on the season.

Reagan Cooper and Caitlin Dugan were named to the All-Tournament team. Dugan led the Red Raiders with 21 kills with a .373 hitting clip and nine blocks in the tournament. Cooper, who earned her second All-Tournament Team honor of the season, tallied 17 kills with a .455 clip and just two errors over three matches.

The Red Raiders jumped ahead early with a five-point run to make it 5-1. Tech increased its lead to 14-5 with a stretch of eight straight points. Rhode Island took four of the next five points to shrink the lead to 15-9, but a block from Madison Gilliland and Alex Kirby an attack error and a kill from Kenna Sauer pushed the advantage back up to nine. The Red Raiders would hold off the Rams for the remainder of the set taking the first frame 25-13.

Rhode Island hung around early in the set, staying within two points of the Red Raiders at 14-12. Tech took five of the next seven points and forced a timeout up 19-14. A couple of aces and kills from Brooke Kanas, Samantha Sanders and Mackenzie Morgan gave the Red Raiders set point as Kanas finished the second set with a block for the 25-16 win.

Tech opened the third set with five straight points to force an early timeout from Rhode Island. The Red Raiders continued to dictate the tempo taking a 14-7 advantage until the Rams battled back with a 6-0 run to pull within one point. Tech responded with an eight-point swing to lead 23-14. A Rhode Island error set up match point, and a kill from Sanders gave the Red Raiders the sweep.

The two squads traded blows to start the first set, even at seven until Ohio State rattled off nine of the next 10 points to take a 15-8 lead at the first media timeout. Tech scored the next two points out of the break, but the Buckeyes kept their foot on the gas, taking the first set 25-14.

The sixth-ranked Buckeyes came out strong in the second, using a 7-0 run to force a Tech timeout leading 8-3. The Red Raiders cut the deficit to four off a kill from Sanders, but Ohio State took the next five points and went on to take the set 25-15.

The Red Raiders never found their footing in the third frame as the Buckeyes went into the media timeout ahead 15-7 and continued to widen the lead throughout the set. Ohio State went on a 4-0 run to close out the set and take the match, finishing a perfect 3-0 in the tournament.

Sanders again paced the Red Raiders with eight kills while Cooper’s .500 hitting clip topped the team as she tallied seven kills on 14 attempts.