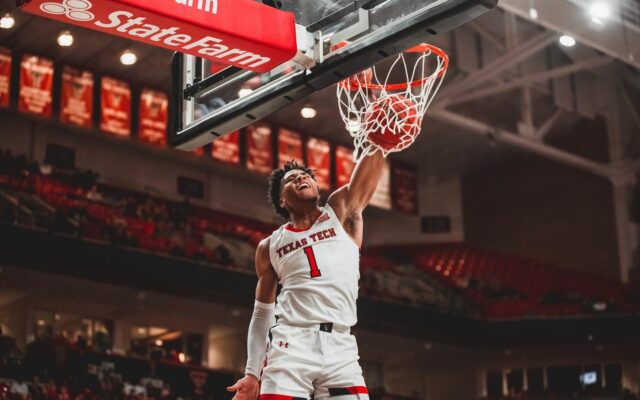 LUBBOCK, Texas – Texas Tech is set to play its first true road game of the season and its first game in the state of Rhode Island in program history with a Big 12-BIG EAST Battle matchup against Providence College at 7:30 p.m. (CST) on Wednesday at the Dunkin’ Donuts Center in Providence, Rhode Island.

The Red Raiders (6-0) are unbeaten through six games for the eighth time in program history after running away with an 89-57 win over Lamar, while the Friars (6-1) are coming off an 85-71 win over Saint Peter’s last Saturday. Tech is 0-1 all-time against Providence College with a 53-52 loss on Dec. 29, 1977 in Honolulu, Hawaii and 0-1 in the Big 12-BIG EAST Battle after a 2019 loss at DePaul. The Red Raiders were scheduled to host St. John’s in the conference challenge last season but the game was canceled by St. John’s due to COVID travel concerns.

Tech has five players scoring in double figures through six games, led by Shannon at 16.3 points per game and Kevin McCullar who is scoring 15.3 ppg. and also leads the team with 6.3 rebounds per game. Bryson Williams is adding 14.5 ppg. and 6.2 rpg., while Davion Warren is at 14.5 ppg. and Kevin Obanor is now at 10.3 ppg. for the Red Raiders who are averaging 88.3 ppg. which is the seventh best in the nation. Obanor led the Red Raiders with 20 points in the 32-point win over Lamar following a 56-point win over Omaha last Tuesday with Terrence Shannon, Jr. leading the team with 18 points. Shannon matched a career-high with four 3-pointers and had 15 points in the win over Lamar and is now shooting 9 of 18 from beyond the arc for the Red Raiders who had a season-high 11 3-pointers in their last game.

STAT REPORT: It’s still early in the season with variations of schedules and opponents, but the Red Raiders continue to be among the leaders in national stat rankings in multiple categories. Tech is currently second nationally with 17.0 offensive rebounds per game and also second with a 17.8 rebounding margin advantage over its opponents through six games. The Red Raiders out-rebounded Lamar by a 41-21 margin on Saturday to boost those numbers, including having 14 offensive rebounds in the 32-point win that took the team scoring margin advantage to 31.0 which is the third largest margin this season. Tech is also No. 10 in turnover margin with a 7.2 advantage and 11th with 19.8 turnovers forced per game. In the Big 12 stat rankings, Tech leads the conference with 42.0 rebounds per game, 8.7 3-pointers per game and a 38.5 3-point percentage after going 11-for-24 in the win over Lamar from beyond the arc. The Red Raiders are one of three unbeaten teams in the conference with Baylor and Iowa State also without a loss.

POLLS: Texas Tech is receiving votes in the Associated Press and USA TODAY Coaches Poll, but remains unranked this season after spending the entire 2020-21 season in the rankings for the first time in program history. TTU was as high as No. 7 last season and finished the year at No. 21. While not in the polls, the Red Raiders are currently No. 11 in the Kenpom.com ranking and No. 20 in the site’s adjusted defensive efficiency ranking. Over the past four years Tech has ranked in the KENPOM.COM: Adjusted defensive efficiency at No. 17 (2021), No. 9 (2020) and No. 1 (2019).

STREAKING: The 6-0 start is the 8th time in 97 seasons that the Red Raiders have opened a campaign with six straight wins and head coach Mark Adams is the first coach in program history to begin his tenure with six straight victories. Tech’s longest winning streak to start a season is 12-0 which came back in the 1929-30 season and most recently a 10-0 start in the 2018-19 season before a loss to Duke in a year that ended on the final night of the college basketball season at the Final Four. Tech has been 7-0 to start a season only five times in program history.

MEDIA COVERAGE: The game will be broadcasted on FS1 and carried on the Texas Tech Sports Network. Kevin Kugler and Bill Raftery will have the television call, while Geoff Haxton and Chris Level are on the radio side of the coverage. Fans can follow the team through social media @TexasTechMBB.

RED RAIDER REPORT: Texas Tech consists of five returners, seven transfers from the transfer portal, one junior college transfer and one player from high school. Tech added six upperclassmen transfers with Bryson Williams, Adonis Arms and Davion Warren joining Marcus Santos-Silva as super seniors.
Shannon is in his third season with the Red Raiders and leads the team with 16.3 points per games this season after going off for 15 points in the win over Lamar. A junior from Chicago, Shannon missed the first three games of the season as a review of his NBA Draft process was being review and has returned to post three straight double-figure scoring performances that includes going for a season-high 18 points in the 56-point win over Omaha. A left-handed shooter, Shannon matched a career-high by hitting four 3-pointers in the win over Lamar and is shooting 9-for-18 (50 percent) on 3-pointers this season. He scored his career-high with 24 points as a freshman against DePaul in the 2019 Big 12-BIG EAST Battle in his hometown of Chicago.

Mylik Wilson is currently third in the nation with a 6.25 assist-to-turnover ratio in a season where he has 25 assists and only four turnovers. A junior who transferred from Louisiana, Wilson is coming off a four-assist performance against Lamar. He leads Tech in assists, steals (2.2 per) and blocks (5 total). He played the past two season at Louisiana-Lafayette and now has 193 assists and 698 points through 61 collegiate games. His assist-to-turnover ratio leads the Big 12 and is behind Iowa’s Connor McCaffery who is at 9.0.

Bryson Williams is averaging 14.5 points and 6.2 rebounds per game this season after going for 16 points and four rebounds in the win over Lamar. A super senior who was at UTEP the past two seasons, Williams has 1,714 points and 782 rebounds through 127 collegiate games. He scored a season-high 22 points in the opener and has a pair of nine-rebound performances against Grambling and Omaha. Williams is 36-for-54 (66.7 percent) from the field and is second on the team with 15 offensive rebounds through six games. Davion Warren comes into the matchup against Providence averaging 12.8 points per game after a week where he had 14 points against Omaha and then six against Lamar. A Buffalo, New York native, Warren is a super senior who played the last two seasons at Hampton University where he averaged 21.2 points per game last season. Warren has a season-high 19 points coming in the second game of the season against Grambling and is currently shooting 28-for-45 (62.2 percent) from the field and 6-for-13 on 3-pointers. He currently leads the Big 12 at the free-throw line where he is 15-for-17 (88.2 percent) which includes him going 7 of 7 at the line against Grambling in that 19-point game.

Obanor is coming off the 67th double-figure scoring performance of his career and season-high with 20 points in the win over Lamar last Saturday. A transfer who played the last three seasons at Oral Roberts, Obanor was 6-for-10 from the field and hit three 3-pointers for the third time this season for his 20-point performance. Obanor has scored 1,368 points and has 712 rebounds through 130 games in his collegiate career, including a 39-point game against Omaha while playing for ORU and an 18-rebound game against North Dakota. A Houston, Texas native, Obanor had 15 double-doubles as a junior last season (with three double-doubles in the 2021 NCAA Tournament) and now has 30 double-doubles in his career.

Santos-Silva is currently second in the Big 12 and 22nd nationally with 3.50 offensive rebounds per game this season after having five in the win over Lamar. A super senior who is in his second season at Tech after three years at VCU, Santos-Silva is coming off a game against Lamar where he had a season-high 12 rebounds and also scored nine points. He’s averaging 7.2 points and 5.7 rebounds this season and has 1,112 points and 840 rebounds through 132 games played in his career. A Taunton, Massachusetts native, he recorded the best game of his career with 26 points and 22 rebounds against Rhode Island while playing at VCU on March 15, 2019. His 12 rebounds last Saturday against Lamar gives him 26 double-digit rebounding performances in his career.

McCullar missed both games last week against Omaha and Lamar with a non-COVID illness after leading Tech with 17 points against UIW in South Padre where he set a new single-game high by knocking down four 3-pointers (4 of 6). McCullar leads the Red Raiders with 6.3 rebounds per game this season with a season-high of nine against Grambling where he also established a new career-high with 24 points. In his fourth season at Tech, McCullar is the only player who was on the Final Four team where he was a redshirt who joined mid-year after graduating high school early. He has now played in 53 games (29 starts) and has 443 points and 243 career points. McCullar, who earned All-Big 12 Honorable Mention last season, is averaging 15.3 points, 3.0 assists and 1.5 steals per game this season.

Adonis Arms is in his first season at Tech after playing last year at Winthrop. A Milwaukee, Wisconsin native, he is averaging 7.2 points and 3.2 rebounds per game as a reserve this season with a high of 12 points in the neutral-court win over Incarnate Word. Arms has hit two 3-pointers in three of six games this season and is currently 7-for-17 (41.2 percent) from beyond the arc. Daniel Batcho has shown his potential over the past two weeks, going for eight points and eight rebounds in the win over Incarnate Word and then leading Tech with 10 rebounds in the win over Omaha. A redshirt freshman from France, Batcho was at the University of Arizona last season where he missed the season due to injury. He is averaging 4.5 rebounds per game.

Texas Tech has had all 12 available players score in the past two games, including Sardaar Calhoun scoring a season-high eight points against Omaha and Chibuzo Agbo going for a career-high seven points in the win. Calhoun is in his first season at Tech after playing last season at Florida State, while Agbo is a sophomore who played in 22 games for the Red Raiders as a freshman. Agbo hit two 3-pointers in the 2021 NCAA Tournament game against Arkansas and is currently averaging 3.4 points per game this season. Clarence Nadolny is in his third season at Tech and is coming off scoring a season-high six points in the win over Lamar. A junior from France, Nadolny hit his first 3-pointer of the season in the game and now has 100 points through 51 career games.

PROVIDENCE COLLEGE: The Friars (6-1) are coming off an 85-71 win over Saint Peter’s last Saturday after taking their only loss of the season in a 58-40 loss to Virginia. Providence College started its season with five straight wins, including a 63-58 win at Wisconsin and a neutral-court victory over Northwestern. Nate Watson leads the Friars with 17.7 points per game, while Jlijami Durham is scoring 13.4 ppg. and Noah Horchler is at 11.9 ppg. and a team-leading 8.7 rebounds per game. Horchler led the Friars with 25 points against Saint Peter’s by going 9-for-10 from the field with three 3-pointers, while Watson had 23 points with him going 7 of 7 from the free-throw line. Horchler had also led the team with 14 points in the loss to Virginia. Providence College head coach Ed Cooley won his 200th game leading the program with the win over Saint Peter’s and is now 200-136 coming into the matchup against the Red Raiders.

UP NEXT: Texas Tech will play No. 13 Tennessee next week in the Jimmy V Classic on Tuesday, Dec. 7 at Madison Square Garden in New York. The Red Raiders are 1-0 all-time against the Volunteers with an 88-71 win on Dec. 3, 1953 in Knoxville, Tennessee. Tech topped No. 1 Louisville in the 2019 Jimmy V Classic for its first-ever win over a top-ranked team