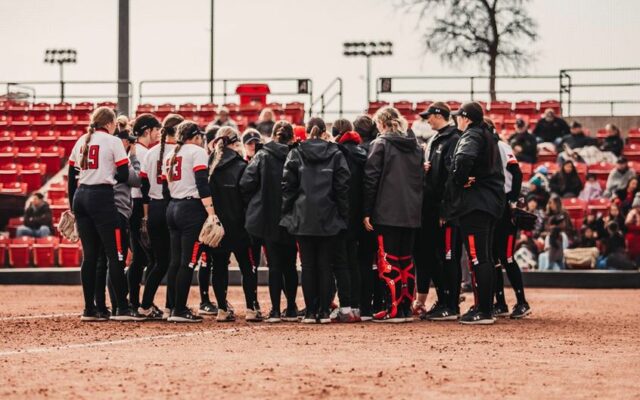 The Red Raiders finish the Jeannine McHaney Memorial Classic with a 3-2 record, both losses coming against North Texas.

Southern put the Red Raiders in a jam early, loading the bases to start the game after back-to-back infield singles and a hit by pitch. A single to center field scored one run, but Maddie Kuehl was able to settle in and work out of the inning with a couple of strikeouts and a fly out.

The Red Raiders wasted no time responding, plating three runs in the bottom half of the inning to take a 3-1 lead. The scoring was sparked by back-to-back-to-back two out doubles. Carson Armijo doubled to right field and was brought in on a double from Ellie Bailey. Bailey then came home on a Riley Ehlen double. Molly Grumbo singled down the left field line to score Ehlen but was thrown out at second trying for a double to end the inning.

Tech busted things open in the second inning, scoring five runs on two hits and two errors. Arriana Villa drew a bases-loaded walk for the first run of the inning. With the bases still loaded, Payton Jackson hit a ball to the second baseman to bring in Riley Love and Peyton Blythe scored on a throwing error to make it 6-1. A wild pitch scored Jackson followed by a solo home run from Bailey to give Tech a seven-run lead.

Grumbo led off the third with a home run to left center to make it an 8-1 advantage.

The Red Raiders scored four more in the fourth inning to push the lead to 13-1. Four straight walks brought in a run and a bases loaded single from Alanna Barraza scored two more. Love doubled down the left field line to bring home the 13th run of the game.

Southern added one more run in the top of the fifth but could not score enough to extend the game past five innings.

Kuehl (1-1) picked up the win in the circle, her first as a Red Raider, pitching 4.0 innings, scattering five hits while striking out five and allowing just one run. Ranci Willis pitched the final inning giving up one run off one hit.

North Texas jumped on Tech early, scoring four runs in the first inning to chase Kendall Fritz out of the game. The Mean Green opened the game with a leadoff home run from Lexi Cobb. Molly Rainey homered a few batters later to make it 4-0, sending a three-run shot to right center.

Tech cut the lead in half with a couple of runs in the bottom half of the inning off a double from Bailey. Villa singled to lead off the inning and a double from Jackson put two runners in scoring position for Bailey, who doubled off the center field wall to score both runs.

The Mean Green pushed the lead back to four in the second inning, scoring two runs on two hits and one error and increased the lead to 8-2 in the third inning with a two-run home run to left field off Morgan Hornback.

A sac fly from Ehlen in the bottom of the third cut the deficit to five, 8-3. The Red Raiders had a chance to cut into the lead further in the fifth, putting two on with one out, but could not capitalize.

North Texas made it an 11-3 game in the sixth inning with a couple of home runs. Cobb belted her second long ball of the game and two batters later Kailey Gamble added a two-run blast to set up a run-rule scenario.

The game ended after the Red Raiders failed to score any runs in the bottom half of the inning, falling in six innings by a score of 11-3.

Tech used five pitchers in the ballgame. Fritz (5-4) made the start in the circle, lasting just a third of an inning after allowing four runs on four hits. Olivia Rains entered and went 2.0 innings before being replaced by Hornback. Hornback also lasted just a third of an inning before she was relieved by Willis. Her 2.2 innings pitched were the most of any of the Red Raider pitchers, but she was relieved by Kuehl for the final two thirds innings.

Ellie Bailey finished the Jeannine McHaney Memorial Classic with a .462 average and a .923 slugging percentage. She tallied six hits, four of which were extra base knocks, with seven RBI. Her on base percentage of .563 led the team as she tallied three walks and did not record a single strikeout. Bailey has recorded an RBI in each of the last seven games with back-to-back multi-RBI games Sunday.
Molly Grumbo’s home run against Southern was her first as a Red Raider, but the 24th of her career, the most of any current Red Raider in their career. Maddie Westmoreland sits right behind her with 23 career home runs across her time at Indiana and Texas Tech.
The Red Raiders are halfway to their home run total from a season ago, with 15 home runs so far in 2022. Nine different Red Raiders have homered with Arriana Villa leading the way with a trio of home runs. Carson Armijo, Ellie Bailey, Peyton Blythe and Abbie Orrick each have two home runs.