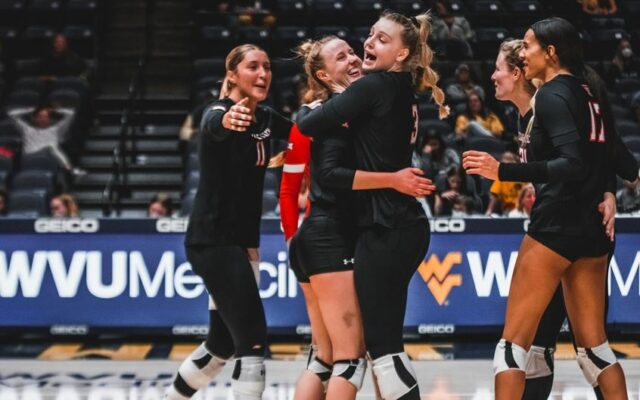 MORGANTOWN, W. Va. – Brooke Kanas tallied a career-high seven blocks as the Red Raiders recorded 13 to lead Texas Tech (16-10, 6-7) to a four-set victory against West Virginia (17-8, 6-7) Thursday night in Morgantown. The win moves Tech into a tie with the Mountaineers in the Big 12 standings.

WVU tied the match, taking set two 25-18. The Mountaineers’ service game came alive in the second frame as they tallied four aces. The Red Raiders hit just .061 in the set while the Mountaineers recorded a .200 clip.

Tech claimed set three using an 8-0 run that go up by as many as 12 at 20-8. WVU did not go down easy, rallying to score nine of the next 11 points to bring the match within four points at 22-17. The Red Raiders were able to hold off the Mountaineer surge to win the set 25-20 and take a 2-1 lead in the match.

The Red Raiders trailed early in the fourth set, taking a timeout down 7-1. Tech fought back, rallying to tie the set at 11. WVU regained the lead, but Tech continued to stay within a couple of points before tallying three straight points to take its first lead of the set at 18-17. The Red Raiders used a 6-0 run to pull ahead 21-17. The Mountaineers answered with a four-point swing to tie the match at 23, before Tech’s first match point at 24-23. WVU tied the match again at 24, but a kill from Sauer and a West Virginia error gave Tech the win.

The Red Raiders take on the Mountaineers on Friday at 5 p.m. CT for the final road match of the regular season.