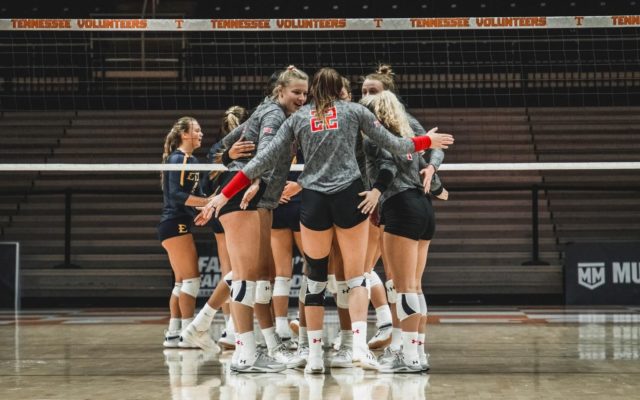 KNOXVILLE, Tenn. –  The Red Raiders closed out the weekend in Knoxville with a five-set win over NC State at the Tennessee Classic. After dropping the first two sets, Tech responded winning the next three to reverse sweep the Wolfpack 18-25, 21-25, 25-22, 25-20, 15-9.

Reagan Cooper was dominant in the final few sets, finishing the match with a team-high 13 kills with a .343 hitting clip. Kenna Sauer recorded her first double-double as a Red Raider with 12 kills and a team-leading 21 digs. Alex Kirby also recorded a double-double with 35 assists and 16 digs, adding five kills in the match.

NC State never surrendered the lead in the first set as the Red Raiders struggled offensively with six attack errors. Trailing 13-10, Tech tallied the next three points to tie things at 13, but the Wolfpack recorded eight of the next nine points to open a 21-14 lead. The Red Raiders were unable to pull back within range as the Pack took the first set, 25-18.

The second set saw four runs of five-points or more starting with a 6-0 Red Raider run to open the frame. After two long runs of their own, the Pack took a 12-9 advantage until Tech came surging back with a five-point swing to retake the lead, 15-14. NC State rattled off seven of the next nine points to force a Tech timeout at 20-17. The Pack used the late surge to claim the second set 25-21.

The Red Raiders battled back with a 25-22 win in set three. Tech got out to a strong start again, taking a 9-3 lead before the Pack tied the match at 10. NC State jumped ahead off a couple of Tech errors, but the Red Raiders answered with three straight points to lead 15-13. Tech held off the Pack for the remainder of the frame to force a fourth set.

After trading points for the majority of the fourth set, the Red Raiders pulled ahead at 18-17 and controlled the pace from there. The Red Raiders clinched the 25-20 set win to force a deciding set taking 10 of the final 13 points, half of which came from Cooper.

A six-point surge in the fifth set propelled the Red Raiders to a 15-9 win to complete the reverse sweep of the Wolfpack 3-2. Sauer took control in the final set with four kills and sealed the victory an ace.