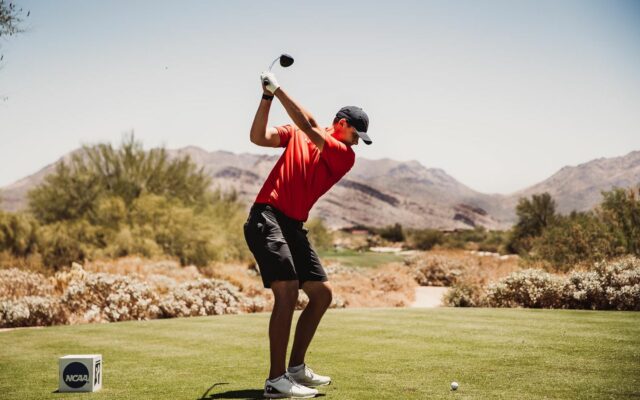 SCOTTSDALE, Arizona – Texas Tech has advanced to the NCAA Men’s Golf Championships match play for the third time in program history after finishing eighth through four rounds of stroke play on Monday at the Grayhawk Golf Club. The Red Raiders will match up against Vanderbilt beginning at 9:10 a.m. (CST) on Tuesday with the second round of match play to follow in the afternoon.

“Our goal all season has been to win a national championship,” said Texas Tech coach Greg Sands who also led Tech to the top-8 in 2018 and 2010. “You have to keep advancing in this format to do that and we’re taking an important step. Now we go head-to-head with other teams and we’ll need to play our best golf. Match play has been some of the most exciting days of my career and I’m looking forward to what our guys can do tomorrow.”

Tech finished eighth after posting 33-over-par for through the four rounds which was ahead of ninth-place Arkansas which was at 39-over. Vanderbilt took the top spot in the field by shooting 14-over, led by individual national champion Gordon Sargent who was even-par through 72 and won on a playoff on Monday night. The Red Raiders will send out Sandy Scott, Calum Scott, Andy Lopez,Baard Skogen and Ludvig Aberg against Vandy.

The Tech-Vanderbilt winner will advance to play the Texas-Oklahoma State winner in the afternoon.

Ludvig Aberg finished the stroke play portion of the tournament tied for 11th at 5-over par after a final round of 72. Aberg made two birdies in his round, but also recorded two bogeys and a double on his card. The junior from Sweden was named the Ben Hogan Award winner last week and is a finalist for the Haskins and Nicklaus Awards. He posted 71-71-71-72 during the four days of stroke play.

Baard Skogen shot 8-over for the championship after posting a 3-over, 73 on Monday and placed 25th on the leaderboard. A sophomore from Norway, Skogen earned GCAA All-Region honors along with Aberg on Sunday. He had two birdies in his fourth round but would also have five bogeys to finish with a four-day card of 73-70-72-73. Sandy Scott was at 12-over at the end of his final round following a 4-over, 74 on Monday. A sixth-year senior, Scott shot 75-71-72-74 during his four rounds and finished 43rd overall.

Andy Lopez and Calum Scott provided the top showings on Monday for the Red Raiders with Lopez shooting a 1-under, 69 and Calum Scott shooting even-par. Lopez recorded three birdies in his round and would make six straight pars to end his day after a birdie on the par 4, 475 No. 3 hole. A senior from Plano, Lopez did not play in the second round and did not have an individual place. He shot a 79 in the first round on Friday and a 73 on Sunday before his 69 to complete stroke play.

“It was a battle all day but we had good thoughts,” Lopez said. “I built some momentum early and carried it on. It’s exciting to go to match play.”

Calum Scott also didn’t place after not playing in the opening round on Friday. He would card a 75 on Saturday before back-to-back 70s at the tournament. He had two birdies on Monday during his final round.

In team match-play competition, a total of five points will be available with one point being awarded for each individual match. Winning teams will advance to the semifinals and subsequently, the finals. The first team to win three points within the team match will advance, or in the case of the final match, be declared the national champion.

“It’s going to be fun no matter what, but our guys are here to win,” Sands said. “We know we’ll have to play well but we’re excited about the opportunity. We talked about sticking to the process before our round. One of our mental approaches is to be unbreakable. We just needed to keep playing and I thought we did a good job of coming out focused with a good start.”