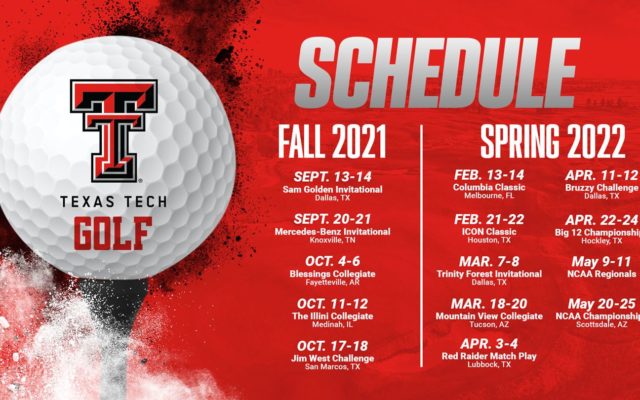 LUBBOCK, Texas – The 2021-22 Texas Tech women’s golf schedule was released Tuesday as head coach JoJo Robertson has tabbed the Red Raiders for 11 regular season tournaments before the Big 12 Championship, which begins on April 22.

The Red Raiders will begin their season with a trip to Dallas to participate in the Sam Golden Invitational (Sept. 13-14) hosted by the University of North Texas. This will be one of two tournament appearances in the state of Texas for the Red Raiders during the fall slate.

Tech will head to Knoxville the following week for the Mercedes Benz Invitational (Sept. 20-21) hosted by the University of Tennessee. The first two tournaments of the season are both unfamiliar for the Red Raiders as they have not played in either event in recent history. Following their trip to Knoxville, the Red Raiders will travel to Fayetteville for the Blessings Collegiate (Oct. 4-6), one of the top events in college golf that is hosted by the University of Arkansas.

Tech will end its non-Texas tournament swing with a familiar challenge as they head to Medinah, Illinois for The Illini Collegiate (Oct. 11-12) hosted by the University of Illinois. The Red Raiders have played in the tournament in each of the last two seasons, finishing fifth in 2018 and then eighth a year ago.

The Red Raiders will close their fall slate in San Marcos for the Jim West Challenge (Oct. 17-18) hosted by Texas State. This will be the sixth-consecutive year Tech has attended a tournament hosted by the Bobcats as they will look to build off the last two years of success following a second-place finish in 2019 and four top-25 individual finishers last season.

The spring semester will begin with the Columbia Classic (Feb. 13-14) in Melbourne, Florida, followed by the ICON Classic (Feb. 21-22) in Houston. Following their trip to Houston, the Red Raiders will go to Dallas for the Trinity Forest Invitational (Mar. 7-8) hosted by SMU. Tech has fared well in this tournament, finishing fifth last season and second during the 2019 campaign.

Tech will round out its preparations for the Big 12 Championships with trips to the Mountain View Collegiate (March 18-20) in Tucson, Arizona, and then the Bruzzy Challenge (April 11-12) in Dallas. In between, the Red Raiders will welcome the likes of Oklahoma, Tulsa and Oklahoma State for a two-day match play event April 3-4 at The Rawls Course.

The Big 12 Championships will be held April 22-24 at The Clubs at Houston Oaks just outside of Houston. NCAA Regional play runs May 9-11 as the Red Raiders will be chasing their 11th postseason appearance in head coach JoJo Robertson’s 13 seasons leading the program.