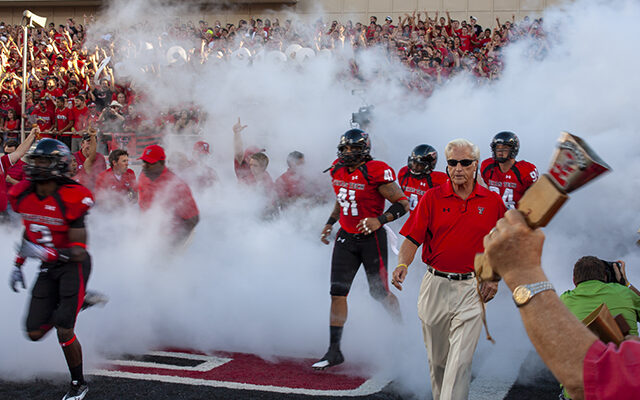 The three hires add to the offensive staff already in place by McGuire, who announced the retention of DeAndre Smith as running backs coach a week ago and then the hiring of Zach Kittley as offensive coordinator and quarterbacks coach and Emmett Jones as passing game coordinator and wide receivers coach Monday.

“We’re excited for the offensive staff we’ve put together,” McGuire said. “Coach Hamby obviously is familiar with this offense from his time with Coach Kittley at Western Kentucky and will help us build a strong and aggressive approach up front. Coach Cochran and Coach Bryant previously worked with me at Baylor and will be great additions to this staff and the culture we are trying to establish offensively and as a program.”

The hiring of Hamby is a return to the Texas Tech staff as he previously was an offensive graduate assistant for his alma mater from 2013-15. A former Red Raider offensive lineman himself, Hamby spent the 2021 season at Western Kentucky alongside Kittley, building one of the top units in college football this past year as the Hilltoppers currently rank 12th for fewest sacks allowed per game entering their bowl.

For Cochran and Bryant, meanwhile, it is a reunion with McGuire as both previously served in various capacities at Baylor before accepting on-the-field coaching positions at Austin Peay. Cochran recently completed his second season with the Governors, serving as co-offensive coordinator and offensive line coach, while Bryant was the recruiting coordinator and inside receivers coach.

In addition to the offensive hires, McGuire has boosted his support staff with recent additions such as former Baylor standout James Lockhart as a defensive quality control coach and Aaron Hall as an associate strength and conditioning coach.

Below are brief bios on each of the three offensive staff hires:

Cochran will shift over to coach the tight ends after previously spending the previous two seasons as the co-offensive coordinator and offensive line coach at Austin Peay. In his two seasons on staff, Austin Peay was a combined 8-4 in Ohio Valley Conference (OVC) play and had three wins over ranked opponents, which included No. 7 Jacksonville State and No. 13 Murray State during the 2021 spring slate.

Cochran’s unit ranked among the best in the conference as he had five offensive linemen recognized on the All-OVC teams during his tenure, including a two-time selection to the first team in Bucky Williams. Colby McKee was also a two-time honoree on the second team for an offense that led the OVC in scoring (32.5 points per game) and total offense (419.2 yards per game) during the 2021 season.

Austin Peay was Cochran’s first full-time coaching role at the FBS or FCS levels after previously serving in various roles at both North Carolina (2020) and Baylor (2017-19). His tenure at North Carolina reunited him with his former college coach Mack Brown as he was an offensive quality control coach for an eventual Orange Bowl participant up until his hire at Austin Peay in November 2020.

Cochran was a graduate assistant and offensive quality control coach during his three seasons at Baylor, assisting with the Bears offensive line during that span. He was a member of a Baylor staff that appeared in two bowl games during that time, first at the Academy Sports + Outdoors Texas Bowl in 2018 and then the Allstate Sugar Bowl a year later following an 11-win campaign and an berth in the Big 12 Championship game.

Prior to Baylor, Cochran spent one season at East Texas Baptist University in 2015 where he was the offensive line coach, mentoring four All-American Southeast Conference selections during that year alone. East Texas Baptist featured the top-ranked scoring offense in Division III that season, averaging an impressive 49.9 points per game.

Cochran began his coaching career, like several other members of the Texas Tech staff, in the high-school ranks as the offensive line coach at Lindale High School in East Texas. He is a former member of the Texas High School Coaches Association.

A three year letterman on the offensive line at Texas, Cochran was tabbed a Freshman All-American by Yahoo! Sports in 2011. He played in 31 games over his Longhorn career, making 23 starts before ending his playing career early in the 2013 season due to a chronic shoulder injury. In addition to his success in the trenches, Cochran was also a first team Academic All-Big 12 selection in 2012 and a four-time member of the Big 12 Commissioner’s Honor Roll.

A native of Hallsville, Texas, Cochran earned his bachelor’s degree in kinesiology from Texas 2014 and then his master’s in sports management from Baylor in 2019. He is married to the former Olivia Dietrichson.

Hamby returns to his alma mater as offensive line coach, a position he starred at during his Red Raider career where he helped lead Texas Tech to four-consecutive bowl appearances, including two trips to the Cotton Bowl. He was previously a graduate assistant for the Red Raiders from 2013-15 under then head coach Kliff Kingsbury.

Hamby heads back to West Texas following one season at Western Kentucky where he, along with new offensive coordinator Zach Kittley, helped build one of the top offenses in the country. Western Kentucky enters its bowl game currently ranked second in the FBS for both scoring offense, averaging 43.1 points per contest, as well as total offense after putting up an impressive 528.0 yards per game.

Despite being one of the most active teams in the country through the air, Western Kentucky has kept quarterback Bailey Zappe clean up front as the Hilltoppers are allowing only 1.2 sacks per game, which leads Conference USA and ranks 12th in the FBS entering bowl season. Western Kentucky is also 10th nationally with only 3.5 tackles for loss allowed per game as the Hilltoppers closed the regular season at 8-5 overall following an appearance in the Conference USA title game.

The unit has graded out nicely each week, according to Pro Football Focus, which has ranked the offensive line as the top front five in pass protection in the country by a full 4.0 points. All five members of Hamby’s unit were tabbed to the All-Conference USA teams compiled by Pro Football Focus with three earning first-team recognition in Quantavious Leslie, Cole Spencer and Boe Wilson.

Hamby was previously an offensive quality control assistant for two seasons with the Hilltoppers prior to being promoted to offensive line coach before the 2021 season. Western Kentucky ranked among the top offensive line units in the country in his two seasons as a quality control assistant, finishing 20th in the FBS according to Pro Football Focus in 2019 and then 14th a year later. The unit was ranked as the top passing-protection front in the country both of those two seasons.

Bowling Green was Hamby’s first full-time coaching possession following his three seasons at Texas Tech where he was the assistant offensive line coach, working directly with the Red Raiders’ centers. He assisted with all instruction for the entire offensive line as part of an offensive unit that also featured Kittley at the time.

An offensive lineman with the Red Raiders from 2005-08, Hamby helped push the Red Raiders to a 37-16 record over his playing career, which including a pair of memorable come-from-behind victories in the 2006 Insight Bowl and the 2007 Gator Bowl. He was later invited to training camps with both the Washington Football Team and the New Orleans Saints following his senior season.

Hamby graduated from Texas Tech in August 2009 with a degree in agriculture and applied economics. He is married to the former Devan Schellhase.

Bryant arrives in Lubbock following two seasons as the inside receivers coach and recruiting coach at Austin Peay. Bryant was hired by the Governors prior to their 2021 spring season where Austin Peay finished 4-2 in Ohio Valley Conference (OVC) play, which included a pair of ranks wins over No. 7 Jacksonville State and No. 13 Murray State. Austin Peay was a combined 8-4 in conference games during Bryant’s two seasons on staff.

Prior to his time with the Governors, Bryant spent four seasons at Baylor where he worked alongside head coach Joey McGuire. Bryant was an offensive graduate assistant with the running backs and wide receiver groups for the 2017-18 seasons before moving to a quality control role with the Bears’ quarterbacks for the 2019-20 campaigns.

His position at Baylor followed a season as the wide receivers coach and operations director at East Texas Baptist where he coached a pair of All-American Southwest Conference selections in Chase Sojka (first team) and Richard Johnson (second team). The duo combined for almost 2,000 receiving yards that season with Sojka leading the team with 83 receptions for 1,074 yards, while Johnson posted 911 yards through the air on 52 catches.

East Texas Baptist featured the top-ranked scoring offense in Division III that season, averaging an impressive 49.9 points per game. Bryant worked that season under Scotty Walden, who would later bring both Josh Cochran and Bryant with him as part of his initial staff at Austin Peay.

Bryant began his coaching career as the wide receivers coach for his alma mater, Mississippi College, in 2015. Bryant, a native of Bullard, Texas, previously played three seasons at Mississippi State (2011-14), leading the Choctaws in receiving yards as a senior. He was the ASC All-Academic team in 2013 and a Gulf South Conference Academic Honor Roll recipient in 2015.

Bryant earned his bachelor’s degree in accounting from Mississippi College in 2015 and then added a master’s in sports management from Baylor in 2019. He is the son of Keith Bryant, who is currently the superintendent of Lubbock Cooper ISD.