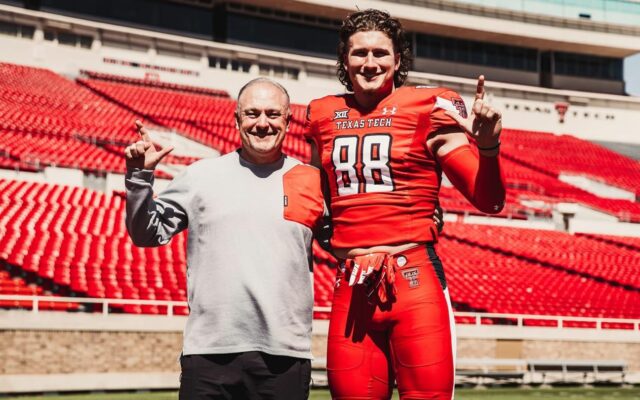 Cupp, a native of Brock, Texas, will have three seasons of eligibility remaining as a Red Raider, giving McGuire and offensive coordinator Zach Kittley another threat in the passing game. One of the top high school prospects in the 2019 class, Cupp will arrive in Lubbock following three years at Texas A&M.

“Baylor will be a big-time addition to our tight ends room,” McGuire said. “He has great size and runs well in space, which is exactly what we are looking for at tight end in this offense. We are excited to welcome him and his family to our football program, and we can’t wait until he arrives on campus this summer.”

Cupp was the No. 1 tight end recruit in the country for the 2019 class by 247Sports and the No. 2 prospect by Rivals upon signing with Texas A&M in 2019. He was ranked 16th among recruits nationally and second among those in the state of Texas by 247Sports that year before signing with the Aggies over offers from the likes of Alabama, LSU, Florida and others.

Cupp appeared in 10 games with one start at tight end over his Texas A&M career as injuries kept him off the field for each of his first two seasons on campus. He made his Texas A&M debut the third game of this past season against New Mexico and eventually made his first career start later in the year against Prairie View A&M.

Cupp will arrive on campus in late May when Texas Tech welcomes many of its signees from its 2022 class.