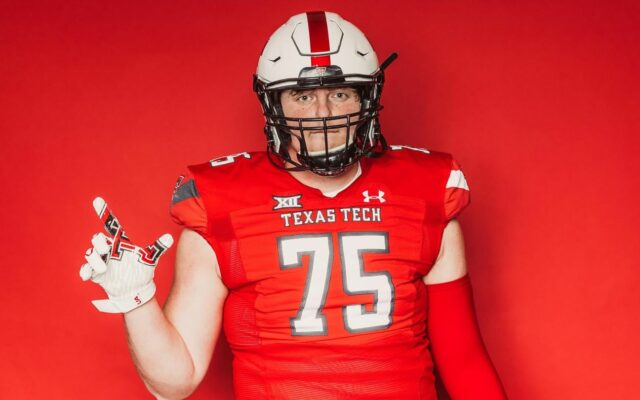 Buchanan returns to the state of Texas with four full seasons of eligibility remaining with the Red Raiders after previously redshirting the 2021 campaign while at USC. He will be immediately eligible to play for Texas Tech this season as part of the NCAA one-time transfer rule that was adopted in recent years.

“We’re thrilled Ty has chosen to come back to the great state of Texas to continue his college career as a Red Raider,” McGuire said. “Ty is extremely talented and will immediately help us up front with his length and size at the tackle position. Our staff was fired up when he gave us the call that he was going to be a Red Raider.”

Buchanan, a native of Corpus Christi, Texas, signed with USC as one of the top offensive linemen in the state after a stellar prep career at Calallen High School. He garnered a slew of honors following his senior season in 2020, earning first team All-State accolades, while being tabbed the District 15-4A Division I Most Valuable Offensive Lineman and a first team All-South Texas selection by the Corpus Christi Caller Times.

Buchanan, a first team All-District selection as a junior as well, was among the top recruits in Texas for the 2021 class as he ranked 66th in the state by Rivals. He was a three-star prospect by both Rivals and 247Sports, landing as high as No. 35 among offensive tackles in the country by the two publications. The 6-6, 290 pound offensive lineman also competed in the discus for the Calallen track and field program.

With his signing, Texas Tech has bolstered its offensive line since McGuire’s hiring last November as the Red Raiders have added three other transfers in Michael Shanahan (UT-Martin), Cade Briggs (New Mexico) and Cole Spencer (Western Kentucky) in recent months, all of whom will be eligible for the 2022 season.

Buchanan will arrive at Texas Tech in late May in time for summer workouts ahead of the 2022 football season.