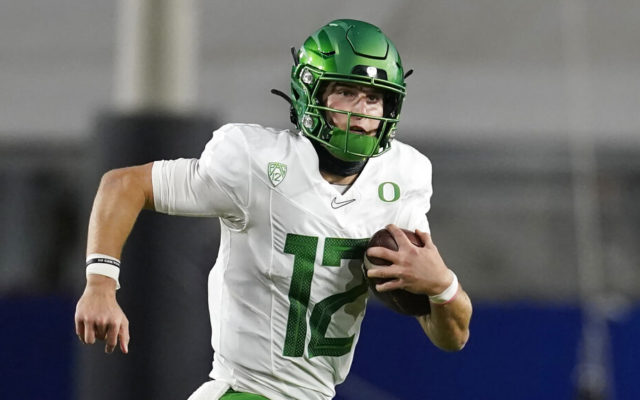 Oregon quarterback Tyler Shough (12) runs the ball during the first half of an NCAA college football game for the Pac-12 Conference championship against Southern California Friday, Dec 18, 2020, in Los Angeles. (AP Photo/Ashley Landis)

LUBBOCK, Texas – Texas Tech head coach Matt Wells announced Monday the signing of graduate transfer Tyler Shough to a scholarship agreement that will allow the quarterback to immediately join the Red Raiders for the remainder of spring practices.

Shough (pronounced Shuck), who started all seven games this past season to lead Oregon to a Pac-12 title, will have three years of eligibility remaining with the Red Raiders, beginning with the 2021 campaign. He arrives at Texas Tech as a graduate transfer after recently earning his dual undergraduate degree in criminal justice and political science from Oregon.

“We’re excited to add a quarterback with Tyler’s ability and experience to our quarterback room,” Wells said. “I’m looking forward to watching all of our quarterbacks compete this spring under coach (Sonny) Cumbie, and Tyler will only help in making that position better.”

In his first season as Oregon’s starter under center, Shough completed 63.4 percent of his passes, while throwing for 1,559 yards and 13 touchdowns with only six interceptions. The sophomore ended the season ranked seventh nationally in passing yards per completion (14.7), 12th in yards per pass attempt (9.34) and 15th in passing efficiency (160.4). He was the Pac-12 leader in all three categories and ranked second in the league for both passing touchdowns and passing yards.

Shough, who also rushed for a pair of scores as part of 271 yards on the ground, helped lead Oregon to a 5-2 record as a starter, which included a win over previously unbeaten USC in the Pac-12 Championship Game and an appearance in the Fiesta Bowl.

Shough appeared in five games as a redshirt freshman in 2019, while serving as the primary backup to eventual NFL Draft first-round selection Justin Herbert. He connected on 12-of-15 attempts for 144 yards and three touchdowns with no interception that season with his best performance coming against Nevada, finishing 8-of-9 overall for 92 yards and a pair of scores.

Shough redshirted his 2018 true freshman season after arriving at Oregon as a highly-rated recruit out of Hamilton High School in Chandler, Arizona. Shough, a consensus four-star recruit by the likes of ESPN, Rivals and 247Sports, was rated the No. 6 pro-style quarterback in the 2018 class and the top player in the state of Arizona to attract scholarship offers from not only Oregon but also Alabama, Florida State and Michigan among others.

Shough will put on a Tech uniform for the first time Tuesday morning when the Red Raiders resume their spring slate with their third practice. Shough will be able to participate in 13 of Tech’s 15 allocated practices this spring.