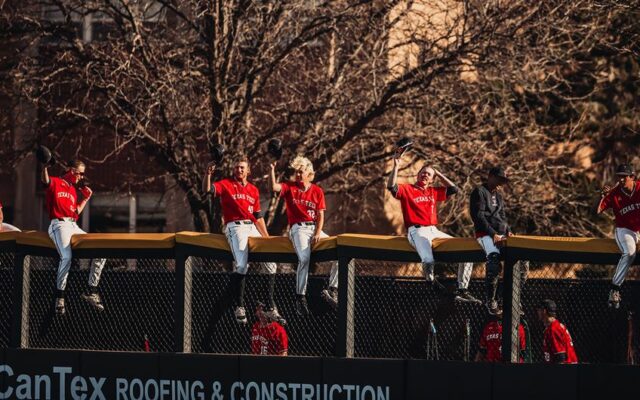 LUBBOCK, Texas – No. 16 Texas Tech improved its home record to 11-0 on Tuesday night, defeating California Baptist, 6-3, before its first Big 12 game this upcoming Friday. The Red Raiders are 18-4 through their opening stretch of the 2022 season and have won 17 of their last 19 games as they can now look ahead to their three-game tilt with conference rival No. 2 Texas this weekend.

Chase Hampton tossed six innings in the win against CBU. In the start, he struck out seven matching a season-high and walked one, and allowed two earned runs off a total of five hits. On an evening the wind was howling 20-30 mph out to right-center field, California Baptist sent two well hit balls into the air that carried over the fence on back-to-back plate appearances to start the third inning. Hampton faced just one batter above the minimum through the rest of his outing.

CBU owned a 2-0 lead, but it was short-lived as Tech answered back in the home half of the third with two runs. Easton Murrell ignited a two-out, two-run rally after he drew a walk to give the inning life after the first two batters were handled cleanly. The next three batters would join Murrell by getting on base. He was driven home on the next at-bat by a triple from Cole Stilwell (watch). After Jace Jung got on base with a walk, an RBI single up the middle by Ty Coleman (watch) tied the game at two runs each and extended his team-leading hitting streak to 13 games.

The Red Raiders took the lead in the bottom of the fourth, a part of scoring the next four runs in the game before CBU tacked on a late solo home run in the ninth. All three CBU runs were scored via a solo home run.

Parker Kelly drove home the initial run that put Tech on top, 3-2. He came up to the plate with no outs and the bases loaded and manufactured a sac-fly. During the following at-bat with Murrell in the batter’s box, the next run would score thanks to a wild pitch. Once he had the opportunity to put the barrel on the ball, Murrell drove home the third run of the inning (watch) with an RBI single, putting the Red Raiders up 5-2.

After a scoreless fifth inning from both teams, a two-out solo home run from Stilwell (watch) increased Tech’s lead to 6-2 in the bottom of the sixth. It was Stilwell’s second home run in the last three games. He also led the team in hits on Tuesday, posting three hits in a game for the second time in the last five games.

Quotable
Head Coach Tim Tadlock
On Hampton starts…
“Chase Hampton, he’s outstanding. It’s a pretty good luxury to have a guy like that on a Tuesday. He’s up to 95 I want to say, really good breaking ball, good command to the fastball. He can put teams on their heels a little bit when he’s pitching ahead in the count. When he did that, he was outstanding.”

On the batters tonight versus its last game…
“Hitting kind of comes and goes. It can definitely be more consistent if you are putting the ball in play more, if you have bat-to-ball skills. All these guys have bat-to-ball skills, and you have to tip your hat to those guys in Iowa. I don’t think it was an approach thing, I don’t think we had anyone get out of a two-strike approach in that game, I think it was just one of those days where you had some punchouts.”

Up Next
Tech will continue its six-game homestand, starting on March 25 against Texas at 6:30 p.m. at Rip Griffin Park.