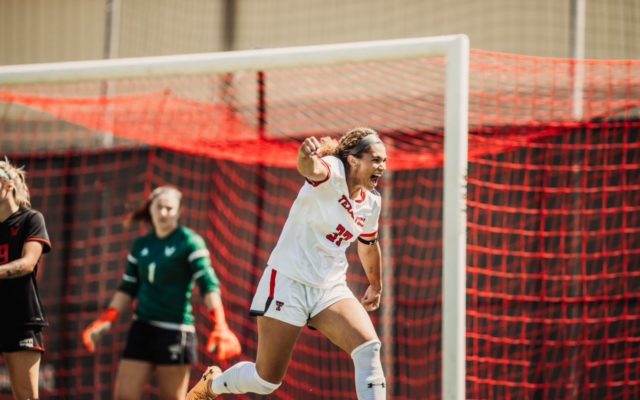 LUBBOCK, Texas – The Texas Tech soccer team opened Big 12 play in thrilling fashion, shutting out the visiting Oklahoma Sooners, 7-0, Thursday night at the John Walker Soccer Complex in front of over 1,300 fans – the highest attendance of the season.

Tech (8-1-1, 1-0 Big 12) scored four times in the first half to take a 4-0 lead into the intermission over Oklahoma (4-6-1, 0-1 Big 12). Macy Schultz opened the scoring in the sixth minute corralling a punt from keeper Madison White over mid field, sprinting past her defender for the finish. Just two minutes later, Kirsten Davis made it a 2-0 affair as she collected a deflection off a Sooner, proceeding to dribble from nearly 40 yards out for the finish into the bottom left corner of the net.

In the 20th minute, both captains connected with each other for the 3-0 lead. Cassie Hiatt looped a pass to Davis at the midfield stripe where she then worked past her one-on-one defender and scored from just inside the 18-yard box into the bottom left-corner of the net. In the 33rd minute, Davis completed her hat trick off an assist from freshman Macy Blackburn, once again, taking a pass from beyond midfield for the solo finish. With the goal, Davis registered her 100th career point, joining Janine Beckie (2012-15, 130) and Kristy Frantz (1996-99, 108) as the only Red Raiders in the 100-point club. The goal was the 40th of her career.

TTU netted three goals in the second half, beginning in the 49th minute courtesy of Hannah Anderson – the Big 12 Defensive Player of the Week – who headed one home off a free kick from about 15 yards off the foot of Blackburn. Ashleigh Williams joined in on the scoring with a one-timer inside the six-yard line from Elise Anderson who made the run on the left side off a pass from Schultz. The scoring was capped off in the 75th minute as freshman Hailey Palmer tucked one to the back of the net off a shot that hit the post from Williams. The score was the first of her collegiate career.

TTU outshot OU, 11-5 with seven shots going on frame. Davis led the way with three shots while White secured one save.