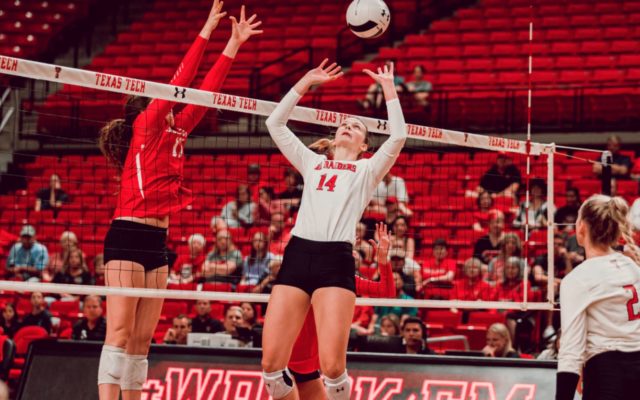 Kirby recorded her 10th double-double of the season with a season-high 55 assists to go alongside her 13 digs.

The Red Raiders opened the first set with a 7-2 lead before the Mountaineers settled in to tie the match at 13. WVU took the lead on an ace and did not look back as they reached the 20-point mark first, 20-17. The Mountaineers increased the lead to four with their third ace of the set at 24-20. Tech fought off two set points before a service error gave West Virginia set one, 25-22.

Tech responded with a gutsy 25-23 set two win to tie the match. The Red Raiders led at the media break 15-12 before the Mountaineers went on a run to take a 21-19 advantage. Following a Tech timeout, the Red Raiders used a 4-0 run to go in front 23-21. The Mountaineers tied the match at 23, but back-to-back kills from Cooper gave Tech the set.

The Red Raiders won the third set 25-20 to take a 2-1 advantage in the match. Tech hit .257 in the set while holding WVU to a .023 clip. The Red Raiders began to pull ahead after a 4-0 run that was sparked by three straight blocks from Kanas. WVU pulled within a point at 15-14, but Tech tallied five of the next seven points to increase the advantage to 20-16. The Red Raiders were able to hold off the Mountaineers to claim the set.

West Virginia battled back in the fourth to force a fifth set with a 25-23 win. The Red Raiders led 17-13 after a four-point swing, but the Mountaineers came storming back on a 5-0 run to tie the match at 18. Out of the break the Red Raiders tallied back-to-back points to lead 20-18, but the Mountaineers would not go away and finished the set with four straight points.

After a back-and-forth start to the fifth set, the Red Raiders pulled ahead with a 6-1 run for a 12-8 advantage. Tech held off a late WVU rally, ending the match with a block from Kanas and Caitlin Dugan, to come away with its second Big 12 series sweep of the season.

The Red Raiders host No. 2 Texas on Friday, Nov. 26 and Saturday, Nov. 27 for the final matches of the regular season.