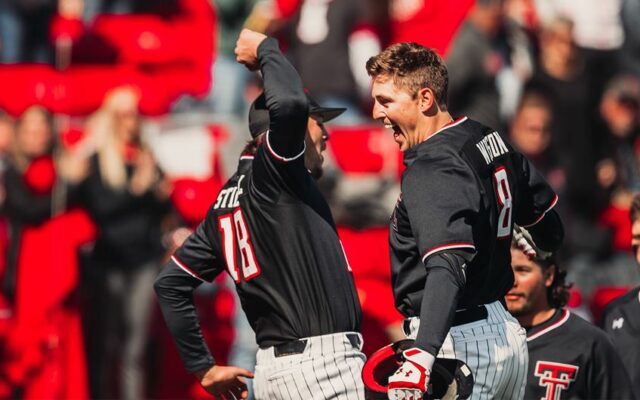 LAWRENCE, Kansas – When Texas Tech’s bats are hot, and Brandon Birdsell is starting, that’s a lethal combination. On Saturday, that recipe produced a dominant 28-2 victory at Kansas for the Red Raiders at Hoglund Ballpark.

It was the second time in 2022, and the eighth time in program history, Texas Tech scored 28 runs or more. On March 15, Tech used a program record 16-run inning to skyrocket its run total to 28 against New Mexico in a home game. Today, on the road, it was an even distribution of offense, as the Red Raiders scored four runs or more in four different innings, with a high of eight in the sixth inning. It marked the first time since March 14, 2012, a Texas Tech team scored four or more runs in four different innings since facing Alabama A&M.

The Red Raiders used a season-high 27 hits, its most in a single game since 27 versus New Mexico on April 27, 2017, to score its 28 runs. Twelve different Red Raiders registered a hit on Saturday, led by Hudson White going 5-for-6. It marked his first career five-hit game and the second time in the last four days a Red Raider had a five-hit game as Jace Jung also went 5-for-6 versus Stephen F. Austin last Tuesday.

Sam Hunt was second in hits behind White, going 4-for-5 from the nine-hole in the lineup. With White hitting seventh, and Parker Kelly eighth, Texas Tech’s 7-8-9 hitters went a combined 10-for-15 from the plate.

Not to be outdone, Birdsell tossed another gem. He exited his second game this season without allowing a hit. Birdsell’s final line was 5.0 inning pitched, zero hits, zero runs, eight strikeouts and two walks. The right-hander also pitched a no-hit game at Rice over 6.0 innings on March 12. During Saturday’s game, Birdsell walked a batter in the fourth, ending a streak of 41 batters faced since he surrendered his last base on balls against Iowa on March 19. Since the Rice game, Birdsell owns a 39-to-4 strikeout to walk ratio.

Kelly hit his eighth home run of the season in the second inning (watch) to put the first two runs on the scoreboard for Texas Tech. Easton Murrell used a run-scoring triple later that inning (watch) to give the Red Raiders a 3-0 lead.

Five runs off of four hits in the third increased Tech’s lead to 8-0. For the first time in 2022, a pair of batters went deep on back-to-back plate appearances as Kurt Wilson hit a two-run home run (watch), followed by Owen Washburn’s solo shot (watch). Wilson has been red hot lately, accounting for four of his six home runs this season over the last six games. Murrell scored two more by knocking a double into the gap (watch) to grow the lead to eight.

Tech scored one in the fourth, and two more in the fifth thanks to a 440-foot bomb by Jung (watch) that traveled over the batter’s eye. The home run tied Jung with Kelly for the team lead in home runs with eight.

With an 11-0 advantage and moving to the sixth, the game got out of control as Tech sent 13 batters to the plate scoring eight more runs to increase the lead to 19-0.

Kansas registered its first hit of the game during the next half-inning and manufactured its first run. The Red Raiders went on to score four more in the eighth and another five in the ninth. The Jayhawks scored its second run in the eighth using a solo home run.

Up Next
The Red Raiders’ series against Kansas concludes Sunday at 1 p.m. Tech is looking to win its seventh consecutive series versus Kansas, and secure its first road sweep of Kansas since 2016.