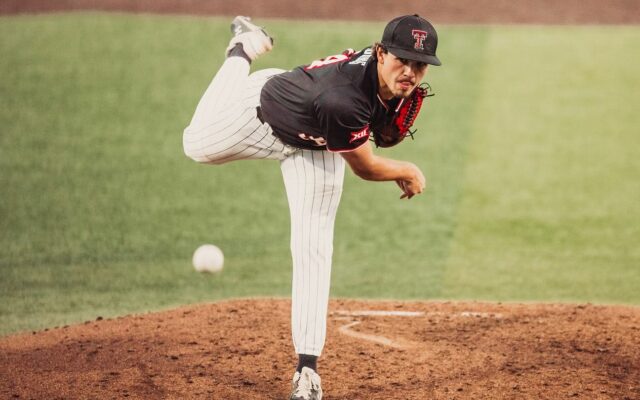 LAWRENCE, Kansas – No. 7 Texas Tech exploded for four runs in the seventh, and three more in the ninth for insurance, to defeat Kansas 8-2 on Friday night at Hoglund Ballpark. Tech improves to 3-1 in Big 12 play and 23-5 overall.

Tech headed to the plate in the top of the seventh, trailing 2-1, and saw three of its first four batters reach to load the bases. With three Red Raiders on the base pads and one out, Cole Stilwell knocked in the game-tying run with a sacrifice fly (watch) to right field.

One at-bat later with two out, Jace Jung laced a three-run home run (watch) to deep center field that hit approximately 15 feet above the fence onto the batter’s eye to hang a four-spot on the Jayhawks in the seventh. With a 5-2 lead, Red Raiders’ starter Andrew Morris returned to the mound in the seventh, as well as the eighth and retired KU in order.

Morris’ outing was a season-long 8.0 innings, and it marked a season-long by any Red Raider this season, en route to his third win (3-0) on the mound. The Big 12’s Newcomer of the Week award winner from this past Monday, struck out six and walked one. In the contest, Morris faced a minimum of three batters in the second, fourth, fifth, seventh and eighth innings.

The feisty Friday night Kansas squad held Tech without a run until the fourth. The Stilwell-Jung combo first appeared when Stilwell led off the inning with a double and Jung scored him on the following at-bat with an RBI single (watch).

Tech flirted with scoring in the fifth, as its 7-8-9 hitters – Hudson White, Parker Kelly and Sam Hunt – hit three straight singles to load the bases. The Jayhawks’ first baseman saved a few runs by snagging a hard-hit liner smoked his way off the bat of Easton Murrell. Stilwell hit into a double-play on the next play. It was ruled Stilwell initially beat the throw at first but following an official review, the play was overturned and took away a Texas Tech run, and ended the inning.

The Jayhawks scored once more in the sixth, thanks to a run-scoring triple, but soon-there-after the Red Raiders would erase the 2-1 deficit.

Jung led Tech from the plate, going 3-for-4, along with four RBIs. Jung owns 10 RBIs in the last three games.

Up Next
The Red Raiders’ series at Kansas continues at 1 p.m. on Saturday while Sunday’s finale is also at 1 p.m.