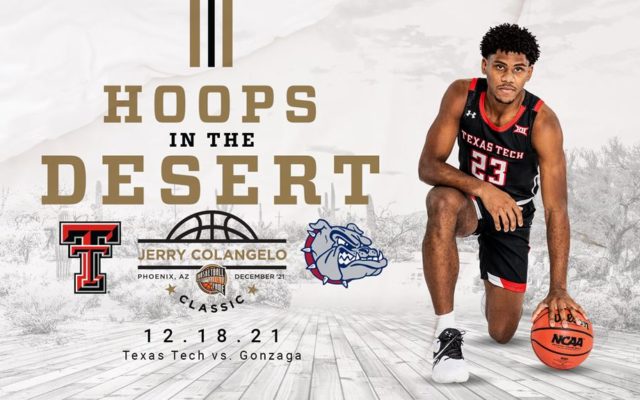 The Naismith Memorial Basketball Hall of Fame announced the field of teams on Tuesday for the third annual Jerry Colangelo Classic. The event is a one-day quadruple-header which will also feature USC vs. Georgia Tech, Grand Canyon vs. San Francisco, and Northern Arizona vs. San Diego. The Bulldogs are coming off a trip to the 2021 NCAA Championship Final and are currently ranked at No. 1 in the ESPN Way-Too-Early Top 25.

Ticket information, game times and additional television broadcast details and will be released at a later date. As the health and safety of the athletes, fans and staff is of the utmost importance, the Basketball Hall of Fame will continue to monitor the COVID-19 situation closely in the coming months and provide updates as needed. The Red Raiders and Gonzaga were scheduled to play each other in the same event last season before it was canceled due to the coronavirus pandemic.

“We are excited to have the opportunity to play in the Basketball Hall of Fame’s Jerry Colangelo Classic,” Texas Tech coach Mark Adams said. “Our program was looking forward to playing in the game last season and can’t wait to get to Phoenix and compete this year. Games like this are tremendous showcases for the college game and we are excited to be a part of it.”

The Red Raiders are 3-0 all-time against the Bulldogs with the most recent game coming in the 2019 NCAA Elite Eight where Tech earned a 75-69 win in Anaheim to advance to the program’s first Final Four. The programs played for the first time in the 2005 NCAA Tournament with Tech earning a 71-69 victory in Tucson, Arizona and then again at the Great Alaska Shootout in 2007 where the Red Raiders claimed a 73-63 decision.

Gonzaga went 31-1 last season and reached the NCAA National Championship Final where it fell 86-70 to Baylor. The Bulldogs won the West Coast Conference with a 15-0 record, had a 24-0 regular season and won the WCC Tournament with wins over Saint Mary’s and BYU. The run to the final Monday night of the basketball season came with NCAA Tournament wins over Norfolk State, Oklahoma, Creighton, South Cal and UCLA.

Along with the appearance in the Jerry Colangelo Classic, a matchup against Providence College on Dec. 1 has also been announced for the Red Raiders. Tech and the Friars will meet up in the Big 12-BIG EAST Battle in Providence, Rhode Island.

The Jerry Colangelo Classic is one event in the Hall of Fame’s series of collegiate events, which continues to grow in an effort to celebrate the game outside the museum walls. The Naismith Memorial Basketball Hall of Fame is proud to continue its relationship with Learfield IMG College for sponsorship representation of its portfolio of collegiate events and Position Sports in an event operations and media relations capacity.

About Phoenix Suns Arena
For more than 29 years, Phoenix Suns Arena has been a hub for world class sports and entertainment as the home of the Phoenix Suns, Phoenix Mercury, Arizona Rattlers and dozens of live concerts and events each year. Vital to the growth and development of Phoenix’s urban core, the recent $230 million dollar transformation of Phoenix Suns Arena has placed the downtown venue among the top sports and entertainment destinations in the country and makes Phoenix a true 24-hour city. The reimagined arena features state-of-the-art improvements that offer a world-class guest experience to all who step inside the doors for years to come. For more information, visit PhoenixSunsArena.com.

About the Naismith Memorial Basketball Hall of Fame
Located in Springfield, Massachusetts, the city where basketball was born, the Naismith Memorial Basketball Hall of Fame is an independent non-profit 501(c)(3) organization dedicated to promoting, preserving and celebrating the game of basketball at every level – men and women, amateur and professional players, coaches and contributors, both domestically and internationally. The Hall of Fame museum is home to more than 400 inductees and over 40,000 square feet of basketball history. Nearly 200,000 people visit the Hall of Fame museum each year to learn about the game, experience the interactive exhibits and test their skills on the Jerry Colangelo “Court of Dreams.” Best known for its annual marquee Enshrinement Ceremony honoring the game’s elite, the Hall of Fame also operates over 70 high school and collegiate competitions annually throughout the country and abroad. For more information on the Basketball Hall of Fame organization, its museum and events, visit www.hoophall.com, follow @hoophall #ColangeloClassic or call 1-877-4HOOPLA