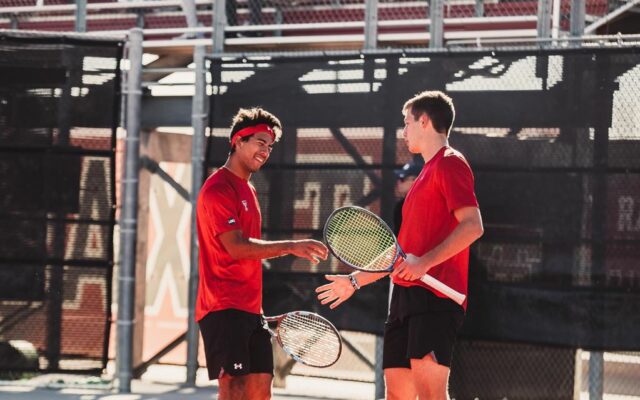 LUBBOCK, Texas — After going nearly a full month between home matches, the Texas Tech men’s tennis program finally returns to the friendly confines of the McLeod Tennis Complex on Friday when they welcome the New Mexico State Aggies and Louisiana Ragin’ Cajuns.

Tech (4-3) will host the Cajuns at 11 a.m., with the second match against the Aggies set for a 4 p.m. start. The matches will be the first two homes matches since the season opener against UTRGV and ACU.

Tech closed out a five-game road swing last Sunday afternoon at Utah. The Red Raiders did receive a strong doubles performance from Franco Ribero and Ilgiz Valiev as the duo combined for a 6-2 doubles victory. Isaac Arevalo and Reed Collier had a match point on doubles court one that would have secured the doubles point, but the duo ultimately fell 7-5. In singles action, the Red Raiders were swept by the Utes who improved to a perfect 8-0 on the young season. Singles highlights included Collier winning an epic 10-8 tiebreaker over Bruno Caula and Dimitrios Azoidis winning his opening set against Blando. Collier was down 4-2 in the second set when the match was called, while Azoidis was up 3-0 in the decisive third set before action was concluded.

The Red Raiders hit the road again next week for a pair of neutral site matches in Dallas. Tech will clash with No. 12 Texas A&M on Tuesday before facing LSU on Thursday.