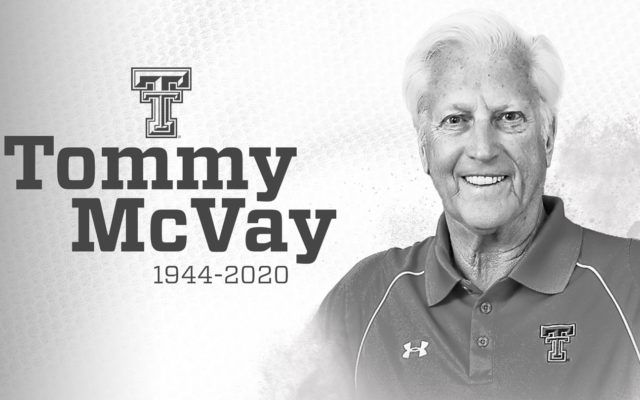 LUBBOCK, Texas – For the past 20-plus years, there was a tale at Texas Tech that there wasn’t a person alive that didn’t like Tommy McVay. How could you not?

McVay was the life of every event, shaking every hand available with usually a good story to go with it. During the fall, he was a reliable confidant to five different head coaches, serving as the Director of Football Operations first under the late Spike Dykes as part of a legendary career with the Red Raiders.

Sadly, Texas Tech won’t have the same smiling personality roaming the sidelines any longer as McVay passed away Thursday at the age of 76.

“We are saddened by the sudden and tragic loss of our dear friend, Tommy McVay,” Director of Athletics Kirby Hocutt said. “In my 10 years now at Texas Tech, I never met anyone that didn’t like Coach McVay. He was an important part of our athletics department for over two decades, and I join his friends, family and countless former players and coaches who mourn his passing.”

The 2020 season was supposed to be McVay’s 24th on the Red Raider sideline where he was usually not far behind any of Texas Tech’s head coaches, first with Dykes and then moving forward with Mike Leach, Tommy Tuberville, Kliff Kingsbury and now Matt Wells.

Not many football administrators survive five different head coaches. Then again, there aren’t many people quite like McVay in the coaching profession, either.

“Tommy McVay was one of the first people I met on my first day in Lubbock,” head coach Matt Wells said. “Man, what a legend. I will always remember and be forever thankful for the encouragement he provided me and the role he played on our staff in our short time together. The sport of college football needs more Tommy McVays in it. He touched countless coaches and players during his time at Texas Tech, and we all mourn his passing and send our sincere condolences to his wife, Chele, and the rest of his family.”

McVay was hired at Texas Tech in September 1997 and was tasked with overseeing many of the administrative duties and recruiting efforts for the Red Raiders under the late Dykes. In fact, Dykes talked McVay back into the coaching profession, giving him an opportunity to join his staff after the two previously met while McVay was working in the appliance and television business, the job that originally brought him to Lubbock in 1988.

McVay turned into a fixture on the Texas Tech sideline, known sometimes more for his slicked-back hair and his dark black sunglasses, worn whether it was day or night. He was occasionally confused for George Seifert, the former San Francisco 49ers and Carolina Panthers head coach, or even Tuberville, depending on who the television cameras spotted.

When the first whistle sounded, most of McVay’s work was complete as he was largely responsible for many of the logistics in traveling 100-plus student-athletes, coaches and support staff through most of his tenure at Texas Tech. During the week, he was also the team liaison to the NFL as well as a team ambassador, driving each Thursday to Midland to speak at a weekly luncheon of Red Raiders in the Permian Basin.

No matter the responsibility, McVay loved it and brought an energy and passion to the Football Training Facility every day.

McVay’s tenure will likely be best remembered for the discovery of a relatively unknown athlete in Oklahoma named Wes Welker, who received little Division-I interest out of high school other than Texas Tech and the Naval Academy. McVay convinced Leach, at the behest of Welker’s high school coach, to sign the undersized recruit as Texas Tech’s final member of his initial recruiting class.

The gamble paid off as Welker quickly earned the nickname “The Natural” on his way to a successful college career that was capped by an NCAA record eight punt returns for a touchdown. Welker ended his Red Raider career in 2003 with 3,069 career receiving yards, departing as the program’s all-time leading receiver before embarking on a successful 12-year NFL career where he redefined the inside receiver position.

“My heart is broken today with the passing of Tommy McVay,” said Welker, now the wide receivers coach with the San Francisco 49ers. “Throughout my life, there have been few people who took a chance on me, and Tommy was the first. As an 18 year old kid that nobody wanted, he believed in me. His contagious positive attitude and love he showed for all his players resonated throughout the building. I am forever grateful and lucky to have had Tommy come into my life. He will be missed but never forgotten!”

McVay knew talent and knew football, something that was proven by a 100-36-2 record in 13 years as a high school head football coach in the state of Kansas. His football and track teams at Protection High School captured state runner-up honors in 1972. He led Derby High School to a similar state runner-up finish a few years later in 1975.

Most of all, McVay was respected in Kansas football circles as he was also named the president of the Kansas Coaches Association and was tabbed to coach in the Kansas East-West Shrine Game. His success paved the way for his first opportunity at the college level from 1983-85 as an assistant coach on Jim Dickey’s staff at Kansas State.

Prior to joining the coaching profession, McVay was a three-year basketball letterman at Southeastern Oklahoma State University where he was also a three-time conference champion in the 440-yard run. McVay finished among the top 16 at the NAIA national championships in 1967, the same year he earned his undergraduate degree from Southeastern Oklahoma State. An avid runner, McVay continued to compete on the track during his tenure at Texas Tech, participating in the Seniors Games well into his 60s.

McVay was also honored for his work locally in 2017 when the Texas Tech chapter of the National Football Foundation presented him the award for outstanding contribution to amateur football at its annual banquet.

McVay is survived by his wife, Chele, and their two daughters, Kelly and Heather, as well as several grandchildren.