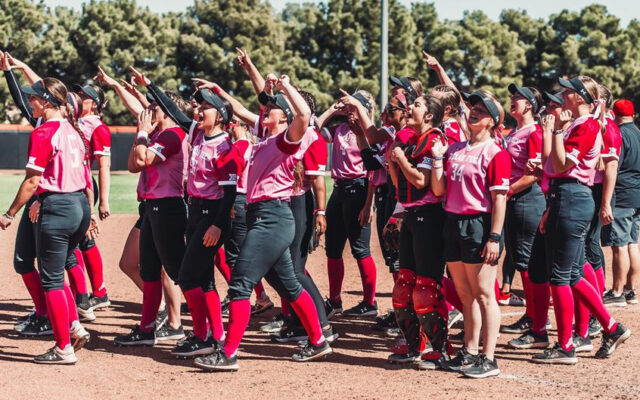 Carson Armijo was 3-for-3 on the day with two RBI and two runs scored while Payton Jackson and Ellie Bailey each registered two hits.

The Red Raiders jumped on Kansas’ Katie Brooks early in the first with four straight singles, plating two runs for the 2-0 advantage. Jackson started the hit parade with a triple off the left field wall, her third of the season. She was brought in by Armijo who singled to left center. Bailey followed Armijo with a base hit of her own and Riley Ehlen scored Armijo from second with a single through the right side. Two hard outs ended the Red Raider scoring.

Kansas tied the game at two in the third inning with some heads-up base running. A couple of bloop singles put two runners on base and a passed ball moved the runners to second and third. A wild pitch scored the runner from third and a double steal allowed the tying run to come home.

Tech got a couple of runs back in the bottom half of the inning on a two-run blast from Bailey. Bailey sent the 2-0 pitch to left field for her third home run of the season to make it 4-2.

The Red Raiders added some insurance in the bottom of the sixth with an RBI single from Armijo that scored Arriana Villa to make it 5-2. It looked like the inning was over as Villa hit a ball down the first base line that was fielded by the first baseman for the out. After video review the ball was ruled foul and Villa worked a walk for a two-out base runner. Jackson then singled through the right side to put runners on the corners for Armijo who drove a ball to left center to score Villa.

Shayna Espy knocked a two-out triple into right field past a diving Armijo to put a runner 60 feet away in the seventh. But a line out to Bailey at first ended the game, giving Tech the series.

Erna Carlin (6-2) went the distance, pitching her fourth complete game of the season. She allowed two runs, one earned, on four hits and three walks while striking out seven.

The win marked the 10th straight at home for the Red Raiders. They are 13-2 at Rocky Johnson Field so far this season and have not lost at home since March 6.
Arriana Villa stretched her reached base streak to 14 games drawing a couple of walks in the contest. Villa’s 16 walks lead the Red Raiders this season, she has recorded 12 of her 16 walks during that 14-game stretch dating back to March 6.
Payton Jackson recorded her third triple of the season, retaking the team lead in triples, she is tied for third in the Big 12 this season, only McKenzie Wilson (5) from Baylor and Mia Scott (4) from Texas have more.
Tech now has four straight series wins over Kansas, winning 10 of the last 12 against the Jayhawks.